27th Jesuit Superior General ‘Black Pope’ Back and to the Left:
‘social justice’- tricky new slogan for traditional Jesuit mission against heretics pointing the finger at the JFK assassination 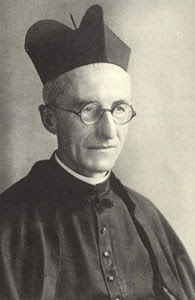 The Apogee & Success of Wlodimir Ledochowski's ‘divine-deranged Polish holy crusade’ marked by his death with reported gastro-intestinal problems just as the war turned at Stalingrad, the Jesuit’s were not going to abandon their historic mission of the counter reformation, but rather cloak it in a new spin, the movements would not be ‘right’ wing against ‘godless communism’ but rather ‘left’ wing for ‘social justice’.

Ledochowski’s extension of Ignatius Loyola’s maximum of the “ends justifying the means” via their dictatorships, more covert with those of the “left”, and more overt with those of the “right” -- exemplified with the example of de Boynes’ support for a Nazi collaborationist government of his own France – dictated a policy shift for the Jesuit Order to further guard and guide the popular perceptive of them, with various Jesuiticisms, with Jean Baptise Janssens writing in his Instruction on the Social Apostolate (1949), described by his Wikipedia biography as:

“a milestone” [regarding] “the so-called ‘social justice question”, Father General Janssens challenged the Jesuit educational institutions. In bold language for those days, the general speaks of completely uprooting the caste among Jesuits and their students. They should not appear “to be allied with the rich and the capitalists”. Those especially who labor in the educational ministry should manifest “an interest and concern for the proletaries that is equal to, or even greater than, that shown to the rich.

Whereas Jesuits were better known for supporting cruel “right” rather then “left” wing dictatorships, now they should no longer appear to be.

“Jesuitical” – a crafty schemer; cunning dissembler; casuist: hostile and offensive them, as used by anti-Jesuits. One using words of intrigue and equivocation.

Janssens above quote presents a good textbook example of several Jesuitical use of words. By including the word “appear” Janssens does not mean the Jesuit Order would not be such an ally- only that it would not appear to be. By using the words “rich” and “capitalist”, Janssens stresses attributes or definitions that are not all that helpful on determining good and bad, as if its better to push the emotion button of envy rather then ponder how they got and use their wealth, or that barter is necessarily so better as to have use abandon a means of exchange- money, which trades at a far higher value then its intrinsic physical-material reality of a printed bill or a bank’s electronic acknowledgement, while distracting from how such money is backed. Such, with its useful like slogans for impressionable college students though distracting from pursuing a more holistic perspective stressing synergies and reactions, marks this sort of Jesuitical equivocation of education/indoctrination. “Social Justice” – the term used as the title of the magazine published during the 1930s by ‘Father Charles Couglin -- is an excellent example: a Jesuitical phrase that immediately sounds good, even as it hardly guarantees anything positive given its neutral meaning as giving what was due, and just who is saying it. “Social Justice” can mean something good, rewards for those that were the objects of injustice, though conversely it can also mean something bad, punishments for those did an injustice; hence it is a highly useful cloak, with the determination/definition of such being hereto given to the Jesuit Order with its established mission of extending the power of the Roman Catholic/Romish-Masonic Church Empire by conspiring against those not loyal to Rome.

Such examples of such “Social Justice” include the Roman Catholic massacres of Protestants, such as the infamous 1572 St Bartholomew Day’s Massacre in France, the Jewish peoples at various times, and the northern Serbs during WW2 in clerical-fascist Ustashe Croatia: all perceivable under traditional Roman Catholic doctrine as the ‘social justice’ for ‘heretics’ via Wlodimir Ledochowski’s counter reformation wars killing 80+ million people to culminate in the destruction of Prussia. Such clever sloganeering, amidst a situation lacking any shock and break with any sort of open intra-Vatican conflict nor excommunications of the pro dictatorship elements (indeed, Spain’s Vatican supported Franco eulogized Hitler as a great defender of Christianity), but rather a buzz of coordinated unity at working towards covering up the atrocities to which their Church of the City of the 7 Hills was most intimately involved, most notably that under the Ante Pavelic Clerical-Fascist with it goal of a purely Roman Catholic Croatia via killing 1/3 of the Serbs (non Roman Catholic South Slavs), converting 1/3 to Roman Catholicism, while effectively driving out the remaining 1/3, marks a Church thus at its very basic nature was not going to change.

It would still consider itself the Vicar of God and Jesus Christ with the divine right of absolute power.

It rather would have changes on the outside with the task of changing appearances. Rather then being correctly seen for supporting entrenched ‘right’ wing fascists, while more covertly supporting ‘left’ wing fascists, it was now presented as supporting ‘left’ wing political movements, something that it would do, while still of course playing both sides of its Hegelian dialectic at defining the limits of popular consciousness by continuing to support “the other side”, and guiding conflicts to a desired, predetermined conclusion.

The period of the Generalate of Janssens – 1946-1964 - encompassed numerous events, including:

Creation of US CIA through such figures as those involved with the assassination of U.S. George Patton.

Various circles of individuals who demonstrated their loyalty to the Vatican during WW2, were protected by the Vatican after the war, beyond the Rat Lines for war criminals from Europe, including those within the governments of the Allies. The most prominent such example within that of the U.S.A. was its General Eisenhower, would be rewarded politically for such actions as those for extending the war the additional 2 years, and for the cover ups regarding that and other Vatican influences, with his successful promotion to becoming the U.S. President after Harry S. Truman, who had been the Vice President who succeeded Franklin Delano Roosevelt who died of a massive cerebral hemorrhage on April 12, 1945.

Within such circles in the Eisenhower Administration were its Secretary of State and its head of the CIA, the Dulles brothers – and respectively – along with their sister Eleanor. Children of --- who was a Presbyterian minister, their lifetimes would be marked by a growing gravitation towards the Roman Catholic Church, exemplified by the decision of the Secretary of State’s son Avery to become an ordained Jesuit priest.

The continued expansion of education (indoctrination), including the popularization of the newest means of disseminating information: TV

Janssens’ 1946-1964 Generalate encompassed the widespread growth of the recently created technology of television; hence establish a new means of widespread dissemination of ideas to be harnessed for the advantage of the Church. As it had it earlier lackeys into newspapers and magazine published as William Randolph Hearst, followed by Time magazine publisher Luce, benefiting from consolidation, would have an obvious interest with the crafting of what became the major networks, shows and personalities.

Romish tools as William Randolph Hearst and the Luce’s remained tight as newspapers and magazines were further consolidated as newer technologies as radio and then TV were developed.

New television broadcasting corporations establishing their networks of local transmitters (stations) 1951 1st broadcast of See It Now produced by Fred Friendly directed by Don Hewitt 1952 NBC Pat Weaver Today; CBS Walter Cronkite selected to replace Douglas Edwards 1st main political event televised- the Joseph McCarthy hearings televised live for 36 hours to an audience of 20 million Joseph McCarthy was … who charged that the US government was widely infiltrated by communists; initially this was presented favorably, before a turn around vilifying him. [quote] …like a Roman Candle… brought up to fail. A mix of justifiable patriotism and limited illumination

If true to his Jesuitical ideology, Janssens favored the appearance of revolution to mask the ancient regime, and would have ordered the execution of a defiant leader, as did … to kill Bismarck … Such was on display with Janssens’ most brazen demonstration of this ‘afterglow’ was the hidden in plain sight Romish-Masonic November 22, 1963 assassination of the John F. Kennedy, the 1st openly Roman Catholic U.S. President John F. Kennedy, both in the extent of the cover up and the assassination’s very design.

Quote that it was Janssens who ordered the assassination of JFK

Illustrations: Catholic religious art featuring the sun and the Masonic triangle Dealey Square triangle- a Masonic Murder with the fatal headshot at the capstone’s gap

A planned murder: Video of ss officer being ordered to stand down.

A fatal shot to the right front temple 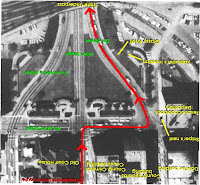 Back and to the Left
Video of press secretary pointing his finger at his right front temple, indicating the fatal shots frontal entry from the area of the grassy knoll-railroad.

“Recovery” of the “magic bullet”

Reality that the MSM got it so wrong as to publish implausibility, such as Look magazine’s insufficiently elevated purported ‘snipers’ view’ from the window which it was alleged that a supposedly acting alone Lee Harvey Oswald fired at the President from the right rear. Reality of the significant number of ‘journalists’ who had their careers kick-started by being in Dallas on November 22, 1963 Reality that the Warren Commission was under the pale of Masonic infiltration with members Warren and Ford belonging to Masonic orders Illustrations: Art of Masonic, Masonic-Roman Catholic connections Pre-Jesuit art displaying ‘IHS’ sunburst etc. Lucifer’s Earthly Rule Reality of the closeness of Time U.S. media with Vatican Illustrations: Time magazine 40th anniversary Quote on Janssens ordering the JFK assassination. Reality of the Romish control of the MSM- example of Time magazine Ironically Janssens died of complications from a brain hemorrhage. This blog would be most interested in posting comparative photos of the brains of both Janssens and JFK- perhaps they are buried somewhere in Georgetown University’s Healy Hall? Perhaps God was trying to tell us something?

Illustrations: JFK, Janssens, Dealey Square, IOA logo, $1 bill back and to the left

There were useful distractions.

Notably, Janssen’s October 5, 1964 death came less then 11 months after the assassination of JFK and only about that number of days before Soviet Premier Nikita Khrushchev was effectively forced to resign on October 15, 1964, by a political push including his ultimate successor Leonid Brezhnev.
Posted by Douglas Andrew Willinger at 1:57 AM