Vatican To "Honor" Martin Luther With Postage Stamp In 2017 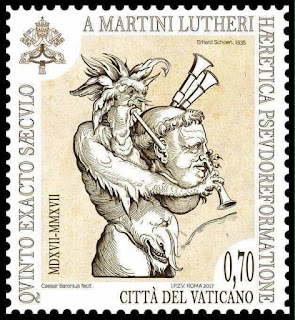 Various sources, such as this, and this, are reporting that the Vatican intends to issue a postage stamp sometime in 2017 commemorating the500th Anniversary of Martin Luther's release of his 95 Thesis, an event credited with sparking the modern Protestant Reformation.

No date nor design has been publically released.

The design shown above, according to the accompanying link is said to be a "joke", though with no information upon its source.

It is probably produced by a Vatican loyal source, indicative of what they would really like to issue.

Posted by Douglas Andrew Willinger at 12:30 AM No comments: 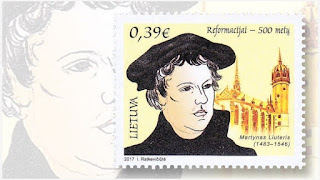 Expect to see various such commemorative postage stamps through 2017 from political entities around the world.

The United Sates of America issued such a stamp in 1983 upon the 500th anniversary of his birth. 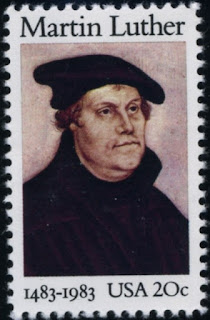 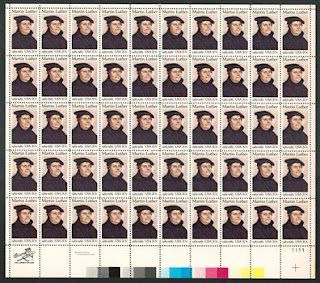 Posted by Douglas Andrew Willinger at 12:30 AM No comments: 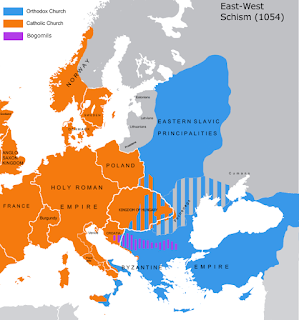 Plus various Continuing Counter Reformation articles from late 2013 and into 2014 about  this part of the world.


Avdiivka (Ukraine) (AFP) - Ukrainian forces and Russian-backed rebels were on Tuesday locked in fighting for a third straight day at a flashpoint town that left thousands shivering without power and sparked renewed EU concern about security in its backyard.

The industrial hub of Avdiivka came under an unexpected assault Sunday from insurgents seeking to wrest back territory controlled by Kiev during the nearly three-year war.

The clashes have claimed the lives of at least 13 civilians and fighters on both sides since Sunday -- the worst outburst of violence since the two sides agreed a new truce on December 23.

Ukrainian President Petro Poroshenko underscored the urgency of the situation by cutting short a visit to Berlin on Monday and convened an emergency meeting of his National Security and Defence Council.

Poroshenko is worried that Donald Trump's rise to the US presidency and praise for Russia's Vladimir Putin may add fuel to a conflict that began shortly after Ukraine's 2014 ouster of its Moscow-backed leader and tilt toward the West.

Putin's spokesman Dmitry Peskov told reporters the Kremlin was "extremely worried" but had "reliable information" that renegade units of pro-Kiev fighters were in fact responsible for the initial attacks. ...

In January, a US Army brigade of nearly 3,500 troops and 2,700 pieces of heavy equipment arrived in Poland in the largest deployments of US troops and armor to that country

"Cyber, misinformation, threatening other countries, Russian snap exercises. We're serious — this is not just a training exercise. It's to demonstrate a strategic message that you cannot violate the sovereignty of members of NATO ... Moscow will get the message — I'm confident of it. "

The combine US and Polish forces immediately started training with tanks, artillery, and helicopters in an overt show of force.

Meanwhile, US soldiers in Lithuania had just finished a similar exercise. Estonia, Latvia, Romania, Bulgaria and Hungary will all also see US troops deployed on a rotational basis.
But the US assurance to vulnerable NATO states in the Baltics comes after a years-long Russian military buildup. Current and former US generals have expressed doubts about NATO's ability to deter or stop an outright attack from Russia, and a report from the think tank RAND Corp predicts that Russia could seize control of the Baltic States within 36 hours of a blitz-like invasion.  ...

... For now, US forces will train, eat, and sleep alongside their European allies, meaning that a Russian attack of any sort on the Baltics will draw an immediate reaction from the US.

Merkel, whose country brokered the maligned ceasefire between Moscow and Kiev in eastern Ukraine, known as the Minsk agreement, is fast becoming the Western leader most supportive of Ukraine’s struggle to integrate into Europe.

Since the start of the conflict in 2014, governments previously hawkish toward Russia, notably the U.S. under Barack Obama, have been replaced by leaders such as Trump implementing a softer stance. The approach within Europe itself is also threatening to splinter after rising French electoral candidate Francois Fillon described sanctions against the Kremlin as "pointless," Reuters reported.

Ukraine’s Poroshenko will visit Berlin to meet with Merkel as well as the President of the Bundestag Norbert Lammert and Vice Chancellor Sigmar Gabriel, according to Ukraine’s Foreign Minister Pavlo Klimkin.

Speaking to one of Ukraine’s major Russian-language broadcaster’s Inter, Klimkin said that during the visit Monday, the two leaders would discuss a broad agenda of issues.

"We had an agreement in early February to discuss a number of important issues particularly how to make Russia fulfill Minsk agreements, the security situation in Donbas, what can we do to free captives and how we can take make use of the Normandy format most effectively today," he said referring to the German-French brokered ceasefire.

Klimkin added that Ukraine and Germany were not only “political partners but friends” and that Kiev would seek German help in implementing anti-corruption reforms.

The Ukrainian minister also dismissed the possibility that Western sanctions on Russia would be dropped without implementation of the ceasefire, despite the Trump administration’s repeated suggestions that the U.S. may lift its sanctions to secure a Russian concession on another issue.

“We are going around in circles again on this issue,” Klimkin said, telling his interviewer the Ukrainian vision was simple. “First we discuss how we define the steps of the implementation of the Minsk (ceasefire) agreements. Then we get guarantees from Russia's fulfillment of the Minsk agreements.”

So far the ceasefire deal, agreed in Minsk, Belarus, has been hard to implement due to a fundamental disagreement about the nature of the Russian-backed forces in eastern Ukraine. Kiev treats them as de facto Russian troops, having captured soldiers not only equipped with Russian military issue weaponry, but also found to be either active or past servicemen.

However, Russia has continued to argue that the militant forces near the Russian border that have kept Ukraine’s vast armed forces at bay for almost three years are local independence fighters, who receive no military support from Moscow.


Posted by Douglas Andrew Willinger at 12:02 AM No comments: