Mr. McCain had sought the endorsement of the Rev. John Hagee, a televangelist, for more than a year and finally won it in February, only to have the Catholic League denounce Mr. Hagee for waging “an unrelenting war against the Catholic Church.” Mr. Hagee called it “the Great Whore,” an “apostate church,” and a “false cult system.” The pastor apologized and said his remarks had been misconstrued, a truce was declared and Mr. McCain still welcomed the endorsement.

Apparently the New York Times forgets what it wrote in 1892 about a faction within the Roman Catholic Church/Vatican, headed by one Miesczyslaw Ledochowski, uncle to the then future Jesuit Order Superior General Wlodimir Ledochowski (b. October 7, 1866, elected Superior General February 11, 1915, retaining that position to his death of December 13, 1942):

It is very well understood, however, that is entirely under the control of Ledochowski, that proud, imperious, and able Pole who made such worlds of trouble in the old Kulterkampf day and who has been able to impose his will very often upon even the present Pope. This powerful man was in a German prison when Pius IX created him a Cardinal in 1875. Next year he was released and banished, and he has since lived in , devoting his great wealth and talents to building up a militant Ultramontagne party about him. His wrath at the treatment he received at the hands of has colored all his political views. He has hated both and and has looked unceasingly forward to the time when French bayonets should restore the temporal power of the in the old .

If we assume that this spirited and resolute prelate will shortly be ruling the Church through its nominal head, it becomes a most anxious question how he will accept the existing political conditions of which have so radically changed since 1875. The new rulers of the Germans have been at pains to show their desire to abolish the last traces of the Kulterkampf. When the pending Prussian Education bill is passed, the German Catholics will be actually stronger than they were before the May laws. During the last half year these dispatches have frequently reflected the new interest which William and his immediate entourage are displaying in the Polish question. Of course a good deal of this has arisen naturally from the contemplation of the necessity of sooner or later fighting : but even more it represents the effort to allure Ledochowski into friendship with by an appeal to his national sentiment. How far this has succeeded will be, as has been said, a most anxious question.

In any event under this new regime there would be an abrupt cessation of pastorals on Socialistic and labor problems and of poems about St. Thomas Aquinas. We should instead see the boldly embark upon the troubled waters of European diplomacy, seeking alliances and taking desperate risks upon the fortune in the next war.

“Should Old Pope Leo Die: the political tendencies of his successor. The Cardinal who would probably win the prize – his Polish supporter – affairs in France and – Spurgeon’s return – Lord Lorne’s appointment", The New York Times, January 23, 1892 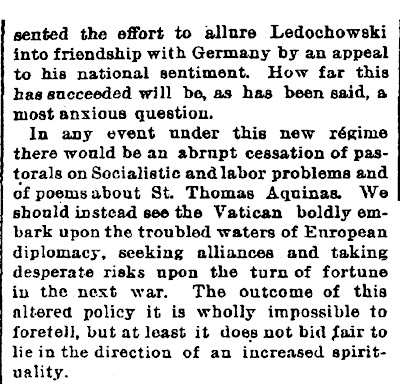 What The New York Times writes now is an insult to the 10s of millions of people murdered by the Ledochowskis' wars- 1st that for Polish independence (WWI), and especially the following war (WWII) for the 'cleansing' of Poland of its Jewish and its more independently minded peoples and so many many more, for the goal of Poland's shift westward for the continuing counter reformation's aim of the wholesale theft of lands from Protestants. "..He has hated both Germany and Italy and has looked unceasingly forward to the time when French bayonets should restore the temporal power of the Vatican in the old Roman States..."

its interesting to see how Rome was able to do a tactical retreat in her the same territory (allowing the Porta Pia's breach) meanwhile she was going to destroy the fundaments of both German empires - Kaiser & Hapsburg through the Balkan question.

Meanwhile the French went defeated (1870)and the Italic reign of Savoy unified the peninsula, the priests of Rome were engaged to instigate the desires of grandeur of the Serbs as trigger for a future catastrophic war, showing them the great advantages of a concordat with the Harlot of 7 Hills. In 1892 the Serb government declared void any Roman Catholic marriage among Orthodox and Catholics in case it has not been celebrated by an Orthodox priest too. It was that cardinal Miesczyslaw Ledochowski the guy who imposed the hard line to Rome, consisting in a total refuse of the Serb statement.
Remember that Rome, with Leo XIII, started a keen policy of appeasament towards the Triple alliance (Italy-Germany-Austria), putting a tactical muzzle on the mouth of Miesczyslaw. The enemy had to be tranquilized and this is too Sun Tzu. The enemy was not so aware of the Vatican diggers diligently working to mine the Balkans. If Rome hated Protestant Prussia, then she hated at the same level the Hapsburg cause the ancient Imperial previlegies to appoint bishops & vetoes on the papal appointments.....Then they slaughtered the previous Serbian bloodline who was in good relations with Hapsburg empire, and substituted it with a true and sincere haters of Protestant Prussia based Germany, a voluntary military who fought Prussian Germany on the side of the Frenchmen in 1870, the man whose prime minster signe the fatal Vatican-Serb concordat, and his name was:Peter I Karađorđević.........