Surreal, how my recent conversation with an anti Jewish Roman Catholic hypocrite happens within hours of the death of perhaps another such individual in Europe. 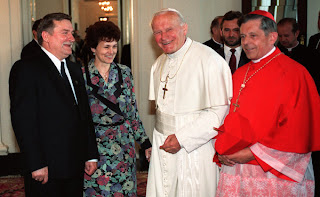 Cardinal Glemp was repeatedly accused of anti-Semitism, notably for his 1989 remarks resisting an agreement to move a Carmelite convent from Auschwitz, where millions of Jews were killed by the Nazis. After Jews complained, the Vatican agreed in 1987 to put the convent in a nearby interfaith center. But as a deadline passed and Jews staged protests, the cardinal went on the offensive, saying:

“Do you, esteemed Jews, not see that your pronouncements against the nuns offend the feelings of all Poles, and our sovereignty, which has been achieved with such difficulty? Your power lies in the mass media that are easily at your disposal in many countries. Let them not serve to spread anti-Polish feeling.” He added, “Dear Jews, do not talk with us from the position of a people raised above all others, and do not dictate conditions that are impossible to fulfill."

The ensuing firestorm reignited old controversies in a largely rural land where the prewar Jewish population of 3.5 million had dwindled to a few thousand. But the cardinal did not back down until the Vatican reaffirmed the pope’s determination to move the convent. The issue resurfaced in 1991, when Cardinal Glemp, touring the United States, encountered more protests and told Jewish leaders that he regretted the pain his statements had caused.

In 1997, Cardinal Glemp belatedly rebuked a rabidly anti-Semitic radio station, Radio Maryja, and the Rev. Tadeusz Rydzyk, who mingled daily outpourings of hate with prayer. The cardinal acted only after Vatican hints and a prosecutor’s slander charges.

In 2001, Cardinal Glemp was again accused of anti-Semitism when he refused to accompany President Kwasniewski to the village of Jedwabne to apologize for the 1941 massacre of 1,600 Jews, most of them burned alive in a barn by Polish neighbors. The cardinal disavowed “ostentatious penance” in advance, and said, “I prefer not to have politicians impose on the Church the way it is to fulfill its act of contrition for the crimes committed by certain groups of people.

Cardinal Glemp retired as Archbishop of Warsaw in 2006, having surrendered the Archdiocese of Gniezno in a reorganization in 1992. He was primate of Poland until he turned 80 in 2009.

Jozef Glemp (pronounced YOO-zeff GLEMP) was born on Dec. 18, 1929, in Inowroclaw, Poland. He decided early to be a priest, but his schooling was interrupted when the Nazis invaded in 1939. His father, a salt miner, joined the resistance, but Jozef, his mother, sister and two brothers became slave farm laborers.

Ordained in 1956, Cardinal Glemp was a parish priest and a teacher before earning doctorates in civil and canon law in Rome. He returned to Poland in 1964 and was Cardinal Wyszynski’s legal adviser for 12 years. He was Bishop of Warmia, a diocese of 1.3 million, from 1979 to 1981, when he succeeded Cardinal Wyszynski on his death.

As he settled into his role as protector of the church in a national crisis, he asked Poles to pray instead of taking to the streets when martial law was imposed and Mr. Walesa was jailed. And before 350,000 spread out over a hillside at the Jasna Gora shrine to the Virgin Mary, he assured them that the voice of the church was on their side.

This exchange typifies Roman Catholic arrogance and hypocrisy, particularly that towards Israel, and the preference for mono- rather than multi-ethnic states fostered by the U.S., which itself is multi-ethnic.

Posted by Douglas Andrew Willinger at 12:43 AM 6 comments: