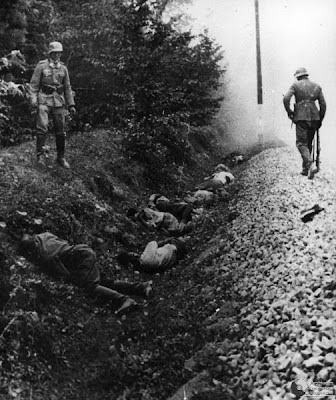 By the early twentieth century, the leadership of the Catholic Church was at war with the modern world. The tone was established by the papal declarations of Pius X condemning "Americanism" in 1899 and repudiating the heresy of "modernism" in 1907. Within the Jesuits, the anti-modernist creed was lead by Father Wlodimir Ledochowski who governed the society as its Superior General from 1915 to his death in 1942. The son of Polish nobility serving the Habsburg court, Ledochowski embodied the reactionary sentiments of old regime Catholicism (MacDo nough 1992, 65-68). Writing after the collapse of the Habsburg empire in 1919 he argued that "all is tottering in modern society..., modern society resembles in its wretchedness the poor paralytic of in that it has no strength within itself to rise from its sick bed..." (Ledochowski in Schmidt 1945, 380). "Freethinkers," those with a contempt for God and religion, "promised that science would solve all the problems of life, becoming the provident and generous dispenser of happiness to the generations of mankind so thirsty for perfect happiness." However, science and the state have proved to be false gods. Now "the souls of men are feeling ever more and more the terrible void created by the conspiracy of governments to tear away modern generations from Christ and His Church" (Ledochowski in Schmidt 1945, 382).

During the German invasion of Poland (1939), special action squads of SS and police (the Einsatzgruppen) were deployed in the rear, and arrested or killed civilians caught in offering resistance against the Germans or considered capable of doing so, as determined by their position and social status. Tens of thousands of government officials, landowners, clergy, and members of the intelligentsia — teachers, doctors, journalists, and others (both Poles and Jews) — were either murdered in mass executions or sent to prisons and concentration camps. German army units and "self-defense" forces composed of Volksdeutsche also participated in executions of civilians. In many cases, these executions were reprisal actions that held entire communities collectively responsible for attacks on German forces or the murder of ethnic Germans. More than 20,000 members of the intelligentsia were murdered in Operation Tannenberg alone.

Poles, Victims of the Nazis

Did perhaps Ledochowski target the better educated Poles via the brutal 3rd Reich occupation as a result of his anti-modernist creed? The "modernists" were really nationalistic, Roman Catholic "liberals" condemned by the Jesuit Oath of the fourth vow. This is why the Order used both the Gestapo and the NKVD TOGETHER to murder 15,000 Polish officers at the Katyn Massacre---a massacre for which only the Germans were blamed in accordance with the Order's anti-German policy.

I can not think of a greater apparent piece of shit then Wlodomir Ledochowski.

Agreed. I shall use the Bible word---"dung." That spiritual bastard has caused more heartbreak and death than any other individual of the 20th century. I call him "the Rat" in VA.

Douglas, er, brother eric, you really shouldn't comment on your own blog until you learn how to turn off the auto-siggy thing.

Hate Catholics much, or just the Roman Catholics?

Nazi sympathizer or just the perfect the ass?

They did the same in the North Adriatic regions, where thanks to the Invasion of Yougoslavia...
http://en.wikipedia.org/wiki/Invasion_of_Yugoslavia
....they started a purportedly aggression to the Slovenian ethnic people, in order to "First to provoke, second to Detect the most rebellious ones (= independent and Freedom fighters in general)to finally – third - to Destroy them". This is the reason for which the Fascist militia of Jesuits were so savage with the Slovenians that even the German SS were criticizing the Italian army high command and the Black SHirts for having a stupid behaviour (they were stupid, but the Jesuits who pushed them to perform all that 'stupidity' were keen).
So a country like Slovenia which once, togehter the mostly Italian ethnical coasts of Istria and Dalmatia, was a 'nest' of Protestants (see Primoz Trubar for Slovenians, Vlacich for the Croats and the many Italians unknown as they weren’t able to escape the Vatican assassins of Inquisitorial Trinunal of Venice), had not only to be punished after 4 centuries, but especially to be cleaned by the most intelligent, critic, independent minded Roman Catholics, who could act in a future as 'dangerous critic elements inside the same RC controlled society' – obstacling the today’s Vatican Balkans crusade (Why in the Balkans the Catholic countries are the winner – together with the Islamic occult allies of Rome – and the heretic Orthodox know only a defeat after defeat since more than 70 years?). Take in mind that the Balkans are the gateway to the Est Europe, to the heretic not-yet fully controlled by Rome Orthodox world. And the conquer of the Orthodox EASTERN world has to be absolutely realized as it is the EASTERN grip on the Protestant North Europe. It’s a war, don’t forget it. What happened with the NOT CONVENTIONAL, reversed Counter Reformation war in North East Europe reflects itself in the bloody events of North Adriatic and Balkans regions. The Red intellectuals, with their Marxist interpretation of the events are the most powerful smoke the Vatican and Jesuits utilize to hide their religious war.

For example see the character Greiser:

---------------
Arthur Greiser (22 January 1897 – 21 July 1946) was a Nazi German politician and SS Obergruppenfuhrer. He was one of the persons primarily responsible for organizing the Holocaust in Poland and numerous other war crimes and crimes against humanity, for which he was tried, convicted and executed by hanging after World War II.
---------------

Of course he was chosen by Jesuit-SS in order to drag the maximum hate on German Protestants after the planned disaster of WWII:

------------------
He was an ardent racist who enthusiastically pursued an 'ethnic cleansing' program to rid the Warthegau of Poles and to resettle the 'cleansed' areas with ethnic Germans.[3] This was along the lines of the racial theories espoused by SS Reichsführer Heinrich Himmler.
------------------

--------------
Greiser’s Poznań was considered the Germanised city par excellence and on 3 August 1943 he hosted a national gathering of Gauleiter and senior Nazis, including Martin Bormann, Joseph Goebbels and Heinrich Himmler.
--------------

Of course the Treaty of Versailles was thought to push Germans in the pawns of Jesuit-Nazis, and it is natural that those 90% Protestant-Lutheran areas saw only the Nazis as protection from Poland aggressivity (instigated by those bishops):