The Washington Post Lies: Guy Fawkes as an "anarchist" 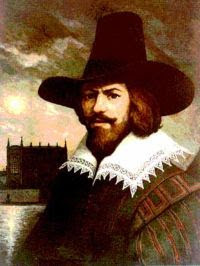 A recent fund raising effort by followers of candidate for U.S. President Ron Paul has revived some attention to the historical figure Guy Fawkes (1570 - 1606).

How to make sense of the Ron Paul revolution? What's behind the improbably successful (so far) presidential campaign of a 72-year-old 10-term Republican congressman from Texas who pines for the gold standard while drawing praise from another relic from the hyperinflationary 1970s, punk-rocker Johnny Rotten?

Now with about 5 percent (and climbing) support in polls of likely Republican voters, Paul set a one-day GOP record by raising $4.3 million on the Internet from 38,000 donors on Nov. 5 -- Guy Fawkes Day, the commemoration of a British anarchist who plotted to blow up Parliament and kill King James I in 1605. Paul's campaign, which is three-quarters of the way to its goal of raising "$12 Million to Win" by Dec. 31, didn't even organize the fundraiser -- an independent-minded supporter did...

According to the Washington Post, Guy Fawkes was an "anarchist."

Anarchism (from Greek ἀν (without) + ἄρχειν (to rule) + ισμός (from stem -ιζειν), "without archons," "without rulers")[1] is a political philosophy encompassing theories and attitudes which reject compulsory government[2] (the state) and support its elimination,[3][4] often due to a wider rejection of involuntary or permanent authority.[5] Anarchism is defined by The Concise Oxford Dictionary of Politics as "a cluster of doctrines and attitudes centered on the belief that government is both harmful and unnecessary."[6]

Guy Fawkes (13 April 1570 – 31 January 1606) sometimes known as Guido Fawkes, was a member of a group of Roman Catholic revolutionaries from England who planned to carry out the Gunpowder Plot.[1] The plot was an attempt to blow up the Houses of Parliament, which would displace Protestant rule by killing King James I of England and the entire Protestant aristocracy, on 5 November 1605. 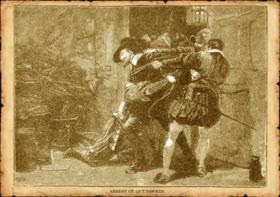 Would not such an individual be more appropriately called a Roman Catholic terrorist?

What would the Washington Post call someone if they tried to do the same thing on Capitol Hill in the event that Congress was insufficiently loyal to the Vatican?

The Washington Post clearly needs to hire a fact checker, and it needs to fire those Vatican lackeys amongst its editors that work to debase their newspaper in order to keep in it in compliance with Rome (such as with the black-out of the proposed South Capitol Mall).

Labels: definitions and the politically sloppy use of words, Guy Fawkes, Rome's Learning Against Learning