According to Eric Jon Phelps 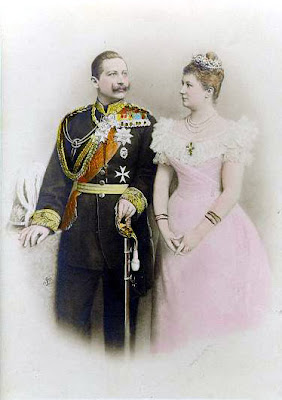 I have a few other facts that may be of interest.

First, in a private meeting between Kaiser Wilhelm II and Pope Leo XIII (the pope that was poisoned by the Jesuits who was then given an antidote once conforming with the wishes of the Black Pope), Leo stated that Wilhelm was to be "the Sword of the Church." This the Lutheran Kaiser refused to do as recorded in his The Kaiser's Memoirs. Shortly thereafter, the Grand Orient Lodge in Germany determined to overthrow the Hohenzollern Dynasty (as was later revealed to Wilhelm by a German Freemason and also recorded in his Memoirs, which overthrow was accomplished following WWI---the first round of the Jesuits' Second Thirty Years' War against Germany (1914-1918; 1933-1945). Additionally, Bismarck and the Reichstag had emancipated 550,000 German Jews in 1871 and the following year expelled the Society of Jesus---further enraging the Order. The Dynasty was formally on the hit list, not only for these reasons but due to the defeat of the Order's Roman Catholic Austria in 1866 and Jesuit-ruled Roman Catholic France in 1871 at Sedan. Napoleon III fled France and spent the rest of his days under the protection of the Order's most obedient British Monrach, Queen Victoria. Failing to subjugate "heretic" Protestant Prussia, the Sons of Loyola would attempt it again via France in secret league with Tzarist Russia. Meanwhile, the Jesuit-ruled King Edward VII was busy creating the Triple Entente preparing for the Company's attempted war of annihilation against Protestant Prussia---WWI.

Further, the Kaiser sought to undue the secret alliance between France and Russia finalized in 1892. In this he succeeded at a private meeting with Nicholas II on the Tzar's yacht in Finnish waters in 1905, following the Order's destruction of the Russian navy by its "Japanese Sword of the Church." (Yes, the Black Pope has been in total control of Japan since no later than 1868.) There, with tears in his eyes, Nicholas vowed never to go to war with Wilhelm. This act, if enforced by Nicholas, would have prevented the beginning of WWI caused by the mobilization 800,000 Russian troops on the Prussian border. This great treaty was rendered useless by Russian Minister Isvolski according to U.S. Senator Robert Owen in his masterpiece, The Russian-Imperial Conspiracy, 1892-1914.

Further, Kaiser Wilhelm opposed the Boer War, that Jesuit-inspired Crusade against the Protestant Reformed, White South African Boers. English Masons Cecil Rhodes, Alfred Milmer and yes, the Prince of Wales---later King Edward VII---conducted this papal crusade and killed tens of thousands of Boers (elderly men, women and children) in concentration camps, delighting the Order's Jesuit-styled "Roundtable" in London. Of course all the gold in the Transvaal became Britain's---and thus was now to be used to finance the Order's agenda for the new Twentieth century---"the century of revenge."

So, the Kaiser was on the Black Pope's hit list: Wilhelm was not a Freemason and was also a hostile enemy of the Pope and his Jesuits. Not good for business or one's personal health.

This brings us to the control of Jerusalem by a nominal Protestant monarch who opposed the Jesuits; who opposed his pro-Jesuit, Masonic uncle Edward VII whom he called "Satan;" who opposed the wicked Jesuit policies of Britain; and who opposed Rome's Masonic Zionist control of Jerusalem. The Lutheran Kaiser knew Britain's Rothschild Zionists---Herzl in particular---were controlled by Rome. Did not Theodore Herzl have a notorious audience with the Pope in 1904? Was not this Zionist traitor to his own people the pawn of the Pope's Rothschilds, streaking to international prominence via the Black Pope's Dreyfus Affair and controlled international press? Thus, to support Britain's Masonic Zionists meant to give control of Jerusalem to the Papacy. This Wilhelm he sought to prevent. He wanted Jerusalem for his Protestant Prussian Empire, and Jerusalem under the Kaiser may well have fared better than Jerusalem under the British, the Order having been formally readmitted into Britain by King Edward VII in 1902. And since Jerusalem must be under Gentile rule until "the times of the Gentiles be fulfilled" (Luke 21:24), would not the anti-Jesuit Protestant German Empire have been a better Gentile master to the Jews than the pro-Jesuit Protestant British Empire?

Therefore, I do not believe that the Kaiser was in Jerusalem in 1898 on behalf of Pope Leo XIII. He was there to thwart the British which included the Masonic Jewish Zionists; he was an enemy of the policies of the Black Pope's international, Masonic "Invisible Empire." The First Reich under Charlamagne was pre-Reformation and thus Roman Catholic---when Jews were severely persecuted (i.e., blamed and mass-murdered for the Black Death). The First Reich was ended in 1806 by the Order's "great avenger" against the anti-Jesuit Papacy and its Holy Roman Empire---Napoleon I. The Second Reich was Protestant and built upon the foundation of military victories against the Jesuit-ruled Hapsburgs (1866) and the Jesuit-ruled Bonapartes (1871), as well as the "accursed" Jewish emancipation (1871) and subsequent suppression of the Jesuits (1872). The Third Reich was completely in the hands of Roman Catholics (Hitler, Himmler, Mueller, Thyssen, etc.) and thus it carried out the policies of that creature of the Jesuit General, Pope Pius XII. The result was the Pope's "Final ]Roman Catholic] Solution to the [Jesuit-agitated] Jewish Question" as championed by the Order's secret emissary and inspiration of both Hitler and Himmler, the Lutheran, Masonic founder of the Order of the New Templars, the openly anti-Jesuit ex-priest, George Lanz. The notorious La Civilta Cattolica---the house organ for the Jesuits in Rome---ceaselessly agitated for the solution to the "Jewish Question" for sixty years (1880-1940).

In conclusion concerning the Kaiser, I believe his good name has been maligned by the Pope's global Press and corrupt historians---Emil Cohen (alias "Ludwig"). Wilhelm was terribly betrayed by General Ludendorff---the first Hitler. Wilhelm has been blamed for igniting WWI which is a bold-faced lie of the Black Pope's Masonically-ruled Press, and now he is blamed for having opposed the Order's Masonic Zionist movement, which very same movement, aided Hitler in the Pope's Holocaust. Like President Nixon, the Kaiser was not killed outright but was humiliated with the loss of his throne, empire, nation and good name now in infamy---a name so accursed by those Blackrobes, the Luciferian Sons of Loyola.

Posted by Douglas Andrew Willinger at 12:44 AM

I appreciate the good article, still I do not exonerate Wilhelm II for his crimes. Protestant monarchs did not go to Vatican to meet Popes, however, Wilhelm II went to Vatican 3 times to visit Pope. Wilhelm II was an agent of Jesuits and a secret Catholic.
Royal Humanist, Schweiz

The indicator of that IMHO was his absolute disregard for the recent history of the Kulterkampf, behaving as if the Vatican was not an enemy of Germany.

That should explain it all.