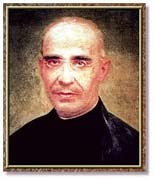 Luis Martin was the 24th Superior General of the Jesuit Order, from 1892 to 1906, a period encompassing the 1904 start of the demonification of cocaine, that rapidly escalated following the 2nd time the Vatican gave a Papal medel award as a 'benefactor of humanity' to Coca product entrepeneur Angelo Francois Mariani (1838-1914)

Note that cocaine's demonification in the U.S. at the official level came through the USDA (Department of Agrilculture- charged with promoting US domestic agrilcultural commodities) via Harvey Washington Wiley, described in a letter to him in 1908 inviting him to a 'smoker for all of the knights.'

Wiley collaborated with Vatican loyalist William Randolph Hearst to popularize the 'drug war' scheme, resulting in food and drug laws requiring retail product labeling for ingrediants, in all consumables EXCEPT cigarettes, alcoholic beverages and cosmetics, while providing severe sentences for possessing Marijuana, Opium and Coca - with the sad result of prohibition's iron law of perverting the latter two into concentrated heroin and cocaine hci/sulfate.

Note that with regards to the plants used as stimulants -- aka Coffee, the various caffeine containing teas, Tobacco, Betal Nut and Coca Leaf, its has been stated: http://freedomofmedicineanddiet.blogspot.com/2008/03/coca-leaf-stands-out-among-all.html

In each major category of intoxicant used by our species, there appear to be one or two drug plants that researchers have noted, are more controllable, hence safer, than all the other plants or synthetics in that category. Coca leaf stands out among all the stimulants, licit and illicit, as the easiest to control and the one least likely to produce toxicity or dependency.

This was by UCLA's Dr. Ronald K. Siegel was an expert wittness regarding the June 1986 fatal cocaine overdose of Len Bias that would be media hyped for an organized political reaction for a more punitive pharamacratic inquisition. The drug 'laws' -- statutes may be a better term as such 'laws' are not legitimate expressions of any commerce clause for protecting the general welfare but rather RICO-False Claims actionable conspriracy-racketeering for market protection, particularly for alcohol and that duet of cigarettes and pharama so indelibly conveyed by those many cigarette advertisements in medical journals conveying an organized medical professions's endorsement of cigarettes beseaking of an alliance of criminal mercantilism extending throughout government: a criminal mercantilism with extremely high costs from those of protecting the most dangerous from the most safe, and the latter's perversion, to that upon the 'law' enforcement and criminal 'justice' complex. Fear of market penetration by Coca at the expense of Tobacco figured strongly in USDA concerns 1908-1914: It was criminal mercantilism to protect Tobacco cigarettes http://freedomofmedicineanddiet.blogspot.com/2008/03/it-was-criminal-mercantilism-to-protect.html So did consciousnous of the reletive dangers to 'narcotics' constrolled substances' of Tobacco on th efloor of the US Congress during the very discussions upon the 1914 Harrison 'Narcotoc' Tax Act: 1914 US Congress: '10s of thousands who dies every year from the excessive use of cigarettes' http://freedomofmedicineanddiet.blogspot.com/2008/08/1914-tens-of-thousands-in-us-who-die.html There are numerous historical indications of Coca as a threat to Tobacco and alcoholism, such as this account by latter 1800s French Dr. Liberman and Villeneuve:

“I have also employed it in cases, happily rare in our army, of chronic alcoholism resulting from the abuse of brandy, absinthe or strong liquors. The produced all the excitement sought by drinkers, but had at the same time a sedative influence on their nervous systems. I have frequently seen hardened drinkers renounce their fatal habit and return to a healthy condition." "I have also used to save smokers of exaggerated habits, from nicotinism. A few glasses of taken in small doses, either pure or mixed with water, acted as a substitute for pipes and cigars, because the smokers found in it the cerebral excitement which they sought in tobacco, wholly preserving their intellectual faculties."

Suffering and death Even at the beginning of his term Martín's physical health had been poor and it grew steadily worse with the years. In 1905, a tumor forced the amputation of his right arm. Pope Pius X granted him permission to celebrate mass despite his disability, a privilege for which he was most grateful. The cancer, however, soon invaded his lungs and he died in Rome, on 18 April 1906.

Posted by Douglas Andrew Willinger at 12:22 AM

And it's worth noting, too, that in the case of Len Bias' death, it was CRACK cocaine that was involved, the highly concentrated version of cocaine, and of course being "street grade" it no doubt also contained various other chemicals used as cutting agents(mannitol, a baby laxative is commonly used, and possibly strychnine as well) so that it was "dirty", not clean in any sense. So, to make the assertion that cocaine, in and of itself, was directly to blame, is quite a stretch - which I'm sure the autopsy and toxicology studies after his death did show.

Not to mention the fact that, as I recall, Len Bias was one of the rare victims of crack cocaine, where (it was said) he was trying it for the first time, and died as a result of a congenital heart defect, which was of course unknown to him or anyone else prior to his sudden death - which could have conceivably occurred just as easily due to his high level of athletic performance - it was only a question of when.

All of this is just for the sake of airing the facts, of course, and not to say that crack is by any means a good thing for society LOL.

However, your points about the deliberate and strategic actions on the parts of various government officials and non-govt behind the scenes shadowy figures (such as the Jesuits in high places you mention) are quite valid in showing us the roadmap of what would become the original "US Bureau of Narcotics and Dangerous Drugs", and later retooled to become the infamous and nearly all powerful DEA.

The powers that be chose which substances to demonize and which ones to protect very carefully, setting the stage for making huge profits from both, by controlling and promoting each in different ways.

End result: It worked out very well for them, they've made enormous amounts of cash ever since. And more importantly, they have assumed almost total control over the "legitimate" drug cartels, as well as the illegal drug markets worldwide, in all the ways that matter - punishing those who don't follow their plans, and rewarding those who do with more wealth and power than they would ever have in any other kind of "business venture".

Add to all this the ability to claim the "national security" pretense, and you've got a really evil and ingenius set of circumstances that can be used, and is, to endlessly bypass Constitutional rights and civil liberties - pretty much with impunity and no accountability to US citizens whatsoever.

According to Dr. Siegel who sat with me at my COCA '95 panel, Bias actually had his fatal OD by drinking tea that he had dumped over 1 gram of cocaine hci (did the MSM report that he died from smoking crack or just somehow imply it?)/

Otherwise, everything else you write is absolutely true! Please see the added links and info in this piece's updated edit.