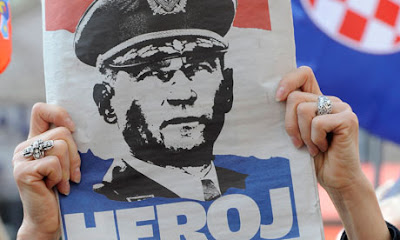 Friday, April 15, 2011
At last - the true horror of the persecution of Serbs by Croats emergeshttp://archbishop-cranmer.blogspot.com/2011/04/at-last-true-horror-of-persecution-of.html

His Grace has occasionally turned to this matter, but it is generally not an angle which interests the 'mainstream media'. Today, however, The Guardian reports that two Croatian generals - Ante Gotovina and Mladen Markač - have been found guilty of war crimes against the Serbs, and have received lengthy jail terms.

This was, of course, a Roman Catholic Croat majority against an Orthodox Serb minority, but it is rarely reported in those terms. Today, The Guardian boldly refers to a 'recalcitrant and powerful Catholic church'. Usually, only when the report is of the persecution of Bosnian Muslims does a hint of religion enter the equation. We are told:

Judges in The Hague found Ante Gotovina and Mladen Markač guilty on eight of nine counts for commanding operations that included the shelling of civilians, the torching of Serbian homes in south-west Croatia, the murder of hundreds of elderly Serbs and the forced exodus of at least 20,000 from the Serbian minority rooted in the Dalmatian hinterland for centuries.

Gotovina was given a 24-year jail sentence; Markač was jailed for 18 years.

This represents a political disaster and profound diplomatic embarassment for Croatia: but it is a triumphant vindication for Serbia. Effectively, the Croats have been told that the decisive victory of the war, which sealed their independent statehood, was a war crime. The judges found:

"Croatian forces committed acts of murder, cruel treatment, inhumane acts, destruction, plunder, persecution and deportation. There was a widespread and systematic attack directed against this Serb civilian population, (creating) an environment in which those present there had no choice but to leave."

His Grace has been sent a letter relating to this, which he is pleased to publish:

A UN court in the Hague has convicted a key wartime Croatian commander, General Ante Gotovina and another General Mladen Markac of committing atrocities in a campaign of shelling, murder and persecution which drove Serbs out of Croatia's Krajina border region in 1995. Having spoken at a Downing Street demonstration at the time, trying to get the British media to acknowledge those crimes, I am personally pleased.

At last the true horror of the persecutions of Serbs by Croats is acknowledged officially in western media who, throughout the Yugoslav war (begun by Croatia in 1991 when they declared illegal independence and started persecuting Serbs in Croatia) blamed only the Serbs.

The Yugoslav war crimes tribunal has also delivered a damning verdict on Croatia's then-president, Franjo Tudjman who declared that independence and whose 1969 book described genocide "as a natural phenomenon commanded by the Almighty in defence of the only true faith (Roman Catholicism)" - Serbs are of course Orthodox Christians. I note that even today the Croatian Roman Catholic Church has defended these convicted Generals.

Tudjman was said by the Court to have led a "joint criminal enterprise" to repopulate the Krajina region with Croats after driving out Serbs. It was Tudjman who had the full support of Germany and Croatia has been invited to join the European Union!

The number of Serbs who died in the WWII genocides (bear in mind, Croatia was at that time given full control over most of today's Bosnia and Herzegovina by Hitler), for which Croatian Ustashe and their Bosnian Muslim allies (yes, they mostly worked together, also it should be noted that minuscule numbers of Muslims who still recognised the fact that they are Serbs who converted to Islam, at times spoke up against the killings) are most responsible, was well over 1000.000. The total loss is hard to determine, as census information isn't entirely reliable, entire families and villages were wiped out (so no one could report the dead), there was an official policy among communists of hushing things up (to avoid ethnic tensions), and many children at that time were only registered a few years after birth. Of course, on top of the number of dead, are the numerous Serbian children whose parents were killed, and they were young enough to not remember what they were, so they could be made into 'Croats'. Incidentally, it was official policy of the Ustashe to 'exterminate 1/3, convert 1/3 and expel 1/3 of Serbs'. They pretty much succeeded, and all with plentiful support from the Catholic church. Members of the Catholic clergy even took part in actual killings. Catholic priest slit the throats of Serbs in Jasenovac, and then went to the death camp's chapel, to pray (while still covered in blood). This is all perfectly well documented, and available to all who wish to know it. A book titled 'Magnum Crimen' is a good start for those who want to know more..

"at least 20,000" which of course is a gross understatement.