Where Are The Prussians? 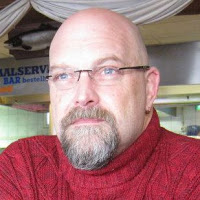 Growing up in the latter half of the 20th Century, depending on where you happened to be in the world, it was often neither popular nor PC if you were saddled with a niggling identity that included the historically taboo epithet “Prussian”.


Recent online debates on the subject have added it to the agenda in the minds of many, across the full spectrum of the political landscape. In 2012, anyone prepared to offer a cut-and-dried answer to that question is either a fool or historically illiterate.

From a purely de jure historical perspective, Prussia was effectively abolished in 1932 and ceased to exist in 1947. Therefore, while many born after the latter date may claim to be “Prussian” by clear ancestry, descending from the original Prussian tribes has long ceased to be a prerequisite.

The first time I heard the term “Prussian” was from my father who, as a liberal Jew fled from his birthplace of Königsberg to the Netherlands in 1933 and thence to South Africa in 1936. He then served in Her Majesty’s South African Forces in WWII in North Africa, Italy and Palestine. He was at pains (for obvious reasons) to de-emphasise his “German-ness” and officially removed the second “n” from Bergmann. “Bergman” is comfortably Dutch or Swedish.
He didn’t talk much of his experiences during the war, but one conversation – probably related over the chessboard at which he usually whipped my ass – is burned onto my brain.

While his English was near-native in its correctness, Dad always retained a German accent. He never went into any detail, but related how, while moving between Prisoners of War after Montgomery’s occupation of Tobruk, he encountered Afrika Korps men who had been at school or college with him. Predictably, during the war and thereafter, comrades and friends had asked him how he felt about “a German fighting against the Germans”. He had a standard answer that might sound glib, but while apologists might dismiss the semantics of it, it was uttered with profound conviction and had a deep impact on my own feeling of identity: “I was never a German fighting the Germans. I was only ever Prussian fighting the nazis”. And then if anyone pointed out: “A Prussian Jew,” he would be quick to retort: “I prefer to consider myself a Jewish Prussian.”

Especially after the war, while the fact that the nazis (probably just like the Afrika Korps, occasionally represented by men who were at school or college with him) had herded his mother and father (who carried the rank of Colonel and held the Iron Cross 1st Class) and countless uncles, aunts and cousins into the gas chambers of Auschwitz, Majdanek, Trebinka, Sobibor etc. as “Jews” understandably prompted him to reject any vestige of a “German” identity, down to the point of never teaching or speaking the language to me. Somehow, though, he seemed to  have felt no less “Prussian”. As a child of the 1960s, the distinction was to lie in ambush until after I’d fought my own war in Africa.

It was about two hours, fifteen minutes and 24 seconds into my compulsory military service in South Africa that I realised the benefit of having a Prussian father with several generations of hussars in the family tree. I used to joke as a teenager: “My father’s not my father, he’s my Sergeant Major.” Suffice to say that he’d taught me to temper my rebellious nature, taught me to say Yes Sir! convincingly so I took to military life a fish to water.

Towards the end of his life, by which time I was a cadet reporter on the local daily with far less reason to temper any rebelliousness, we happened to be watching the TV news together when an item appeared showing some or other neo-nazi manifestation in Germany. Groups of leather-clad yobs shouted fascist slogans, while carefully avoiding actual nazi chants (which would get them arrested immediately in Germany today) and not displaying any swastikas or SS runes for the same reason. “See,” Dad said, pointing to a particularly beer-bloated skinhead who was waving the Imperial War Ensign while bellowing inarticulately, “they can’t display their Hakenkreuz so they’ve hijacked our flag, and here they are, dragging it through the mud. It’s going to be up to your generation to take it back and restore its honour”. 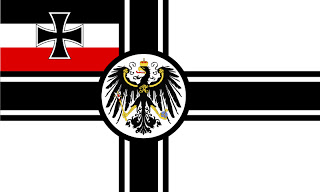 During WWI, the similarity between the British White Ensign and the German War Ensign caused so many "friendly fire" incidents in the poor light of the English Channel and the North Sea that Royal Navy ships took to flying the Red (Merchant) Ensign.

Dad’s story is one of countless similar ones that live on in the aural history of individuals, but alas, mainstream history is written (at best tinged and at worst biased) by the victors, undeniably for the masses. Those who have studied history will appreciate that “Prussia” has, for worryingly illogical reasons, become (erroneously) associated with an undereducated fascist minority and thence the whipping boy blamed for WWI and much of the nationalistic militarism that resulted in WWII. The example of the likes of Claus Von Stauffenberg (a Schwabian with Prussian roots) is the exception that proves the rule.

Then, some history is selectively and retrospectively un-written. It’s seldom prominently mentioned (usually tucked away in paragraph 51 of page 6 of chapter 17) in (English-language) accounts of the Battle of Waterloo: The fact that Wellington’s victory was by no means secure until the arrival of the eccentric (code for: mad as a bucket of frogs) and brilliant (the two so often cohabit) General Gebhard Leberecht von Blücher with fresh PRUSSIAN troops! Curiously, the Hanoverians and Hessians etc. who fought suffer no such violence at the hands of post-1914 historical editors.

But the question remains: Who are the Prussians today? For unless you are deluded, you can’t wipe-away the identity of an entire nation with the stroke of a (un)diplomatic pen.

Feeling “Prussian” is complex, especially considering the water - and considerable quantities of blood - that have flowed under the proverbial bridge in our name.

And as always, the facts are far more subtle.

Prussia’s enlightened “founding Father”, Emperor Frederick the Great – arguably the first monarch in history to achieve a state of inward military preparedness without outward bellicosity – who composed the Hohensalzburger Marsch to commemorate his (militarily unpredicted) victory over the Austrians – must have done double-back-flips in his grave when he saw what was perpetrated from ’33 to ’45 for “Germanic supremacy”, often “in his name” by the cohorts of a (very dangerous) little Austrian corporal.

In reality, Emperor Frederick was a consummate composer, an able musician (specifically on the flute) and a committed Freemason who, repeatedly in his many writings which should be read in the vernacular of the zeitgeist, extolled the benefits of multiculturalism and raised questions that Western Europe and the World are still wrestling with today. In basic terms, he asserted that a monarch (leader) should not show clear allegiance to one or other political or religious group, lest it alienate the others. And the strength of an Empire is in its diversity.

So in 2012, who is a Prussian? You’ll get different answers from anyone you ask. It has interesting commonalities (and comparable infinity in its answers) with the questions: who is an Englishman/Frenchman (perish the thought we open the can of dragon larvae that’s labelled: “who is a Jew?)[*-DW]

So, is a Prussian someone who can trace his/her ancestry back to the pre-Germanic Prussian tribes? Undeniably and quintessentially yes!

Is a Prussian a descendant of the Germans, Poles, Balts etc. who either settled or were “resettled” there over the centuries and came to call it home? Yes!

Is a Prussian someone with Russian ancestry who was born in Kaliningrad yet strives for modern western-looking democratic ideals? Yes!

Is a Prussian someone whose philosophy of multicultural harmony and mutual cultural respect mirrors that of Emperor Frederick the Great? Certainly!

When considering the above, the only conclusion I can come to is that in 2012, whoever considers themselves to be a Prussian must be embraced as a Prussian.  [*-DW- definitely applicable here]

When they return from the diaspora of the 20th Century (don’t expect them to come back in droves, at least not initially), most will still “look Prussian”, but it would be naïve to ignore that East Prussians cast far and wide will certainly have resulted in some who might have an Asian, African or other ethnic “look”, while still nurturing a sincere and zealous East Prussian loyalty and/or identity.

History has made ethnicity irrelevant – you can no more judge the quality of a human being from the colour of their skin than you can from the colour of their eyes, or the books they hold sacred. Nor can I hold any man guilty of the crimes his father might have committed against mine. We can't look backwards 'cause like it or not, none of us is going that way. So In my book:

1)      Whoever would go to the barricades for democratic freedom of self-determination for what Moscow calls the “Oblast of Kaliningrad” is a Prussian.

2)      Whoever would step forward to govern (or just to contribute) once the occupation of Moscow is lifted (or if necessarily overthrown), that is a Prussian!

3)    In the spirit of Frederik the Great, we will keep our gloves clean to extend the hand of friendship to all who will take it, but we will keep our swords sharp to defend ourselves against those who will not.

Count me in on all of the above.

Yes, this should be an example for the question of "Palestine", but it seems that someone is using the honorary Jews ("Palestinians" today Islamized) as a mean of competition between Sunni/Shia about "who has the right to wipe Israel off the map". The Israeli occupation of "Palestine" is used by the Vatican to put in competition both Islamic faction, and at the same time is the glue to unite Islam in the name of the "Zionist threat". With the pope as spiritual leader of the unity and seeking to conquer Jerusalem as "inherited right of conquest from Roman Empire".

Israel should tie the restriction on the concession of citizenship to a pure question of defense, making to appear clear and loud that there's no racism behind eventual opposition to it. Eastern Prussia should be the model especially because the historical Lutheran anti-Semitism there became a pale example if compared to centuries of Vatican persecutions against the Jews. I fear only the Jesuit Shabtai Tzvi Masonic Zionism, among the greatest enemies of a Reformation of Israel and Islam.