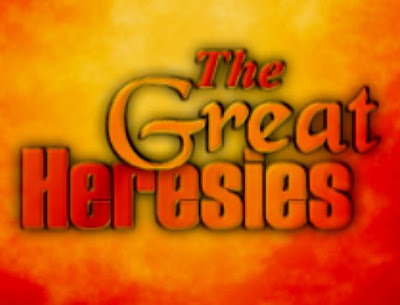 Fr. Charles Connor PhD, historian and priest of the Diocese of Scranton, Pennsylvania, examines how the Catholic Church has dealt with heresy throughout its history and in the process gained a greater understanding of the Truths of the Faith.

I saw a program on TV two nights ago (at 11:30 P.M. EST, September 9, 2008 on EWTN - "The Global Catholic Network") that I found quite DISTURBING. It was, I believe, "Part 2" of a series entitled "The Great Heresies". A Roman Catholic priest (I believe his name was "Rev." Charles P. Connor) spoke for half an hour concerning the Roman Catholic Church's historical mandate to stop heresies and to punish heretics. Remember, this type of "talk" or discussion is taking place in the year 2008 A.D.!

This Roman Catholic priest on EWTN was endeavoring to JUSTIFY the murder of "heretics". He stated that the [Roman Catholic] Church "HAD TO" take up the SWORD. He also said that it was the STATE that made "heresy" a "capital offense". (This is nothing more than a continuing "whitewash" of the Roman Catholic Church's RESPONSIBILITY for the horrors of the Inquisition, since few if any State officials in predominantly Roman Catholic countries ever dared to fail to carry out the execution of "heretics", which was URGED upon the State by prelates of the Roman Catholic Church. State officials knew that if they even hesitated in carrying out these murderous duties, they ALSO could be called before the Inquisition.)

This Roman Catholic priest on EWTN also stated that the [Roman Catholic] Church had to protect the faithful [i.e., Roman Catholic adherents] from those who might seduce them and cause them to LOSE their faith.

This Roman Catholic priest on EWTN also admitted that there is NO "freedom of thought" as concerns the [Roman Catholic] Church's established doctrine.

Do we realize how SERIOUS this kind of "HATE SPEECH" is? Do we truly realize how SERIOUS it is when the most powerful geopolitical-financial-religious institution in the world (i.e., the Roman Catholic Church) is on television (1) justifying the murder of those who disagree with Papal Rome's unscriptural doctrines and practices, and (2) whitewashing the horrors of the Inquisition?

Dot #1: The Office of Inquisition STILL exists to this very day, albeit under the more benign-sounding title of the "Congregation for the Doctrine of the Faith". It is located in the Palace of the Inquisition in the Vatican. To the best of my knowledge, the records on "how to" torture individuals "to the maximum" have never been destroyed. (Additionally, the current pope, Benedict XVI, pulled multiple terms as the "head Inquisitor" prior to becoming pope!)

Dot #2: The official timeframe of the Inquisition, according to several researchers, is 1203-1808. The TORTURE was still "on-going" in 1808 when Napoleon's troops found underground torture chambers in Spain. Yes, the Dominicans had torture chambers under the floors of their monastery in Madrid, Spain in 1808! Dave Hunt, on page 79 of his book, "A Woman Rides the Beast" (1994), tells us the following about these Dominican torture chambers in Madrid, Spain in 1808: "The chambers were full of prisoners, all naked, many insane. The French troops, used to cruelty and blood, could not stomach the sight."

Dot #3: When the official Inquisition with its torture chambers was brought to an end in 1808 by Napoleon's troops, the Roman Catholic Church whined and moaned over the loss of the active operations of such an efficient institution (i.e., the Inquisition) for extirpating (i.e., exterminating) heresies and heretics.

Dot #4: Despite the fact that the Inquisition "officially" ended in 1808, we find Jesuit-controlled Papal Rome running a vicious modern-day Inquisition in much of Europe during World War II, where she helped install Roman Catholic dictators in Nazi Germany and other Fascist states. (The Jesuit-controlled Vatican SUPPORTED Nazi Germany and the other Fascist states in Europe for almost the entire war!) Jews, Protestants, and Orthodox Christians were especially targeted for extermination during this modern-day Inquisition.

What gives to such a creature of Vatican diplomacy its peculiar importance is that here we have an example of the [Ed.: Roman] Catholic Church's IMPLEMENTING ALL HER PRINCIPLES, unhampered by opposition, or by fear of world opinion.

The uniqueness of the Independent [Ed.: Roman] Catholic State of Croatia lies precisely in this: that it provided a MODEL, in miniature, of WHAT THE [Ed. Roman] CATHOLIC CHURCH, HAD SHE THE POWER, WOULD LIKE TO SEE IN THE WEST AND, INDEED, EVERYWHERE. As such it should be CAREFULLY SCRUTINIZED. For its significance.is of the GREATEST IMPORT to all the freedom-loving peoples of the world."
- Avro Manhattan ("The Vatican's Holocaust"; 1986; Page 9)

Dot #7: The "takeover" of key institutions of power and influence in the USA (e.g., the mainstream media and the government) began in earnest over a century ago. Please consider the following two quotes:

"We find that the ROMAN CATHOLICS, who comprise less than one-sixth of the population [Ed.: in 1924 when McCarty's book was published], have been the DOMINATING POWER in our political affairs and of late years have headed almost every national, state and municipal office from the President down to the dogcatcher.

During the [Ed. President Woodrow] Wilson administrations [Ed.: 1913-1921] the Army, the Navy, the Treasury, the Secret Service, the Post Office, the Emergency Fleet, Transports, Printing, Aircraft and dozens of others were presided over by FOURTH DEGREE KNIGHTS OF COLUMBUS!"
- Burke McCarty ("The Suppressed Truth about the Assassination of Abraham Lincoln" (1924); Page 248 of the 1999 Larry Harrison edition)

"What [Ed.: Professor Carol A.] Brown [Ed.: of the University of Massachusetts] had learned from Carl Bernstein, I [Ed.: i.e., F. Tupper Saussy] had discovered for myself over several years of private investigation: the PAPACY really does run United States foreign policy. Yes, [Carl] Bernstein noted that the leading American players behind the Reagan/Vatican conspiracy to a man were 'devout ROMAN CATHOLICS'. But the reporter neglected to mention that the ENTIRE Senate Foreign Relations committee was governed by ROMAN CATHOLICS as well."
- F. Tupper Saussy ("Rulers of Evil"; 1999; Pages 1, 2)

Dot #10: The Supreme Court and other federal courts: Over the past several decades many justices on the Supreme Court had been Jesuit-controlled high-level Freemasons or Roman Catholics. (I believe we currently have five Roman Catholics as justices on the Supreme Court.) Many federal judges here in America have been, and are, Freemasons. (Please keep in mind that the Jesuit Order CONTROLS the highest levels of Freemasonry!) Is it any wonder that our God-given, Constitutionally spelled-out Rights have been under such attack in the federal courts of our land?

Dot #12: There are TEN FEMA regions in the USA. There are also TEN Jesuit
provincials assigned to the USA. Discussion of martial law here in the USA has taken place even in the mainstream media. Do you think that it is just a coincidence that we have TEN FEMA regions and TEN Jesuit provincials assigned to the USA? When we go under total martial law, who will REALLY be running each FEMA region - the FEMA governor, or the Jesuit Provincial (or his personal representative) standing in the shadows?

Dot #13: "The Global Catholic Network" (EWTN) is running a series entitled
"The Great Heresies" in 2008 (which is JUSTIFYING the Inquisition).

Now PLEASE "connect" those 13 "dots". I believe that such "dot connecting" should alert us all to the very real danger of a modern-day Inquisition occurring right here in America - and SOON! The Knights of Columbus have a motto: "Make America Catholic (M.A.C.)" Do you think that they may be close to accomplishing that goal? Could the Knights of Columbus be used here in a Fascist America in the near future in the very SAME manner as the Roman Catholic Ustashi units were used in Fascist Croatia in the early 1940s?

Note: You might want to check on "The Great Heresies" series that is now running on EWTN - The Global Catholic Network. (Maybe EWTN will offer this series of programming on DVD?)

The Rev. Charles P. Connor will be discussing “The Great Heresies” on TV this evening.

The rector and pastor of St. Peter’s Cathedral in Scranton will be the featured guest on EWTN, Eternal Word, the global Catholic television network, during an 8 p.m. interview by Jesuit Father Mitch Pacwa on “EWTN Live.”

“The Great Heresies,” Father Connor’s latest series for EWTN, “will examine the great theological controversies that have plagued the church in her long history, and how the teaching church responded to these difficulties ‘under the guidance of the Holy Spirit’,” according to a release from the diocese.

Among the other series Father Connor has produced and hosted for EWTN are: “The History of the Catholic Church in the United States,” a two-part series on the history of the church from apostolic times to the present; “The Doctors of the Church,” “The Saint for the Third Millennium: Therese of Lisieux,” “Historic Catholic Converts,” “The Sacraments through the Ages,” “Defenders of the Faith” and “The Priesthood through the Ages.”

The author of several books, including “Classic Catholic Convert, Defenders of the Faith in Word and Deed,” and “Meditations on the Catholic Priesthood,” Father Connor’s newest book, “The Saint for the Third Millennium: Therese of Lisieux,” will be issued in the spring by Alba House.

His column, “Our Catholic Heritage,” has been a feature of the Catholic Light since 1993.

Ordained to the priesthood for the diocese in 1990, Father Connor is former pastor of St. John the Evangelist in Susquehanna and St. Rose of Lima Parish, Carbondale, and was named Cathedral rector in 2005. He serves as Censor Librorum and historian for the diocese.

One of the other things that has kept Father Connor busy of late is assisting with the planning of the St. Patrick’s Day Parade Mass, to be held at 10 a.m. Saturday at St. Peter’s Cathedral. Theresa Osborne is the Mass coordinator, and attorney Thomas Gilbride is Mass chairman. Also on the committee planning the annual Mass, which precedes the parade and 5K run, are Mary Kate Gordon, president of the Ladies of the Ancient Order of Hibernians; Daniel Haggerty, representing the Friendly Sons of St. Patrick; Deacon Edward T. Kelly, St. Peter’s Cathedral; Sean May, president of the Irish Cultural Society; Joseph Ruddy, president, Irish American Men’s Association; the Rev. Christopher Sahd, secretary to Bishop Joseph F. Martino, and Katie Sunday, president of the Society of Irish Women.