--- “The Trismegistic treatise ‘The Virgin of the World’ from Egypt refers to ‘the Black Rite’, connected with the ‘black’ Osiris, as the highest degree of secret initiation possible in the ancient Egyptian religion – it is the ultimate secret of the mysteries of Isis. This treatise says Hermes came to earth to teach men civilization and then again ‘mounted to the stars’, going back to his home and leaving behind the mystery religion of Egypt with its celestial secrets which were some day to be decoded.” 5

And from Maxi Augusti -  http://laverdadnoslibertara.blogspot.com/

The Real Meaning of the Masonic image of "Lady and The Broken Column"
http://laverdadnoslibertara.blogspot.com/2012/10/el-real-significado-de-la-imagen.html
http://translate.google.com/translate?sl=es&tl=en&js=n&prev=_t&hl=en&ie=UTF-8&eotf=1&u=http%3A%2F%2Flaverdadnoslibertara.blogspot.com%2F2012%2F10%2Fel-real-significado-de-la-imagen.html

Then from this blog and from the Cutting Edge Forum, we bring our research to a completely disinterested explains the typical Masonic imageria associated with the third degree of Masonry, the degree of "Master Mason (Constructor)" called " Lady and the Broken Column ". 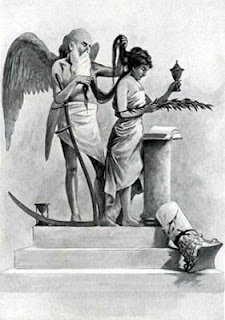 Source: Mackey Encyclopedia of Freemasonry
But as we have said, this is the official explanation. Are we to believe in it or do some research of your own?  Let's see ...

In the myth of Osiris and Isis, Osiris was killed by Set for having been deceived, having been placed in a coffin made ​​to fit exactly Osiris. September then the coffin with the dead Osiris was thrown into the Nile The coffin was carried by the Nile to the sea and to the city of Byblos, in Syria. ran aground and was a sacred tree took root and grew rapidly around the coffin, bearing the coffin 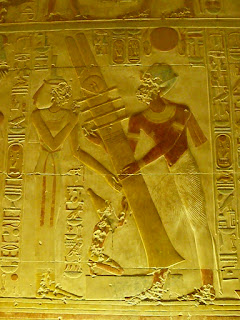 
This is the true meaning of Masonic image of "Lady and The Broken Column"!  It is a mere copy of this story in the myth of Isis and Osiris! Notice the similarities:
THIS IS WHAT I MEAN! Of course let's not forget how this myth Babylonian DJED column really is! Veamos... Let's see ... a dead god, given up, which is the basis of a very high building (the column ... which is both one of its symbols), and then found and brought back to life by her and by her son ... Hmm, it sounds like the story of Nimrod, Semiramis and Tammuz in the Tower of Babel!

Note also that a Mason # 33 of Mackey suggests ... and twisted and taken out of context and mocks the Scriptures to do it!  Very typical of Satanists, Christians always try to pass each other, both are Catholic, as Masons.


May this humble research be helpful for you, brothers.

In Yahweh, through Christ,

Brother Maximilian.
This to me looks like the two pillers representing 'the Two' - the Divine Couple - of which the Earth Godess Figure represents the female - and that she is being reprimanded from Above for killing the male - and her needed rehabilitation requires a ritual of a sequence of events.

hi sir,in Exodus Egypt looks like hell, from which the "elect" is extracted if he remembers God's name and salute ritual during passover night. We could say Egypt-Mitzraïm is the devil's kingdom,a huge demonic solar metaphor of this world which isn't Joshua's one.Would you say, if i have undustood your different indications, Lilith should be the spiritual wife of humanity as soon as Joshua has saved her? Or perhaps, i am wrong. Thank you.