A Lesson on Race and Ethnicity

Australians at Mulberry and Broome Street
- why don't they build a freeway here? 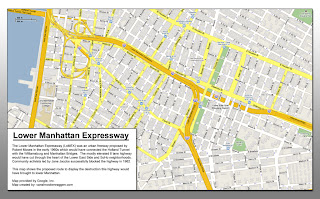 It is about 1990.  I am in lower Manhattan, New York City, driving an automobile of a friend who is entertaining some of his friends.  They are Australian, complete with the British Australian accents.  They are white, with dark hair.  We are in the vicinity of "China Town" a place of a high concentration of Chinese immigrants and business attractions, and hence high levels of traffic, whether pedestrian, bicycle and of course vehicular.

One of the Australians comments about the latter- the vehicular traffic, exclaiming what the area needs is a motorway (freeway- that is express highway free of grade crossings)- why do the people tolerate such a status quo and not organize to get this area some much needed motorways-freeways?

Mind us- this was somewhere along Canal Street or Delancy and Broome Streets- the very corridors where official planning had been programeed for express highways alongside.

To call for the construction of a Lower Manhattan Expressway is considered clear heresy.  Had not Jane Jacobs established the way people were supposed to think about any such freeway when she vandalized the public hearings in 1962 by taking it upon herself to destroy the stenograhpers records, as if her opinion could not tolerate any dissent?

To call for the construction of a Lower Manhattan Expressway in some form though is undeniable.  Just look at the existing conditions to see that the lack of any such facilitates is harmful, notably with the asthma rates comparable to those alongside the Cross Bronx Expressway (a facility getting excessive traffic from the failure to construct the relief routes).  The traffic is already there.  And by not building a freeway, there's no chance to contain the vehicular emissions, such as that from the 100s of trucks along this corridor every day.

Talk about "making due".

I responded that I understood where he was coming from- that he made perfect sense.

Australia is a mainly wide open country but which has suceeded in adopting the freeway to the relatively crowded built out inner cities. 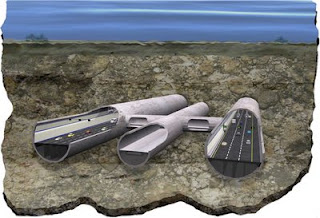 No need to do a 'Blade-runner' style future tech thing, like the stuff produced via the 1972 Ford Foundation induced designs by Paul Rudolph, with their overstated neighboring architecture and their failure to go all the way to cover the otherwise depressed roadways, nor provide the stuff where Jane Jacobs actually made sense of providing street level retail with pedestrian traffic providing necessary eyes on the street- and not that simply of the eyes through the windshields of the vehicular traffic better upon a motorway-freeway. 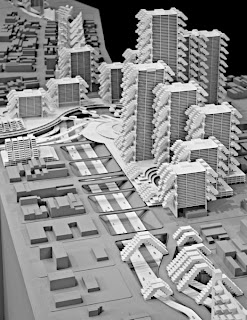 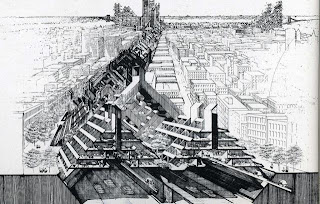 Few figures invoke the tensions of urban planning in New York City like the larger than life Robert Moses. But it is another iconic figure, Paul Rudolph, who may have the last word on the project that Moses hoped would seal his legacy — the Lower Manhattan Expressway. An important new exhibit at Cooper Union, organized by the Drawing Center, provides a much-needed reminder of Rudolph’s breadth of vision for Lower Manhattan.

In 1967, following Rudolph’s tenure as dean of the Yale School of Architecture, the Ford Foundation commissioned him to do a study of the Lower Manhattan Expressway project. The idea for an expressway connecting the Holland Tunnel with the east side of Manhattan was, of course, nothing new. City planners had conceived of such a project in the ’30s and Moses, with his broad brushstrokes across the New York City canvas, envisioned three major expressways in Manhattan: the Lower Manhattan Expressway, using Broome Street as a corridor; an elevated midtown route that would punch through skyscrapers; and a third expressway uptown coursing through Central Park. Moses attempted to break ground several times throughout the next three decades. By the 1960s, however, with a trail of condemned lots, razed blocks and miles and miles of new highways behind him, the City and Governor Rockefeller had finally grown tired of his particular brand of public works and, perhaps, his hubris. In 1961, Jane Jacobs published her famous tome about preserving the social fabric of the city, very much in reaction to Moses, and this contributed to and reflected his waning influence. In 1968, Moses was removed from his position and his LoMAX project was demapped and eventually canceled.

Into this atmosphere of Moses disfavor and a nascent, outspoken preservation movement entered the Gropius-trained, modernist Paul Rudolph. From 1967-1972, with the continuous financial backing of the Ford Foundation, Rudolph devoted himself to this study.

See the route as a walking tour
http://www.oldnyc.com/lomex/contents/lomex.html

And here was an Australian with his Australian-British accent imparting the need for a Lower Manhattan Expressway.

His ancestry was Arabian-Lebanese, 2nd or 3rd generation.

Alas, I had to tell him that there were no funded public design studios for adopting ideas taken elsewhere to possibilities in New York City, nor elsewhere.  Despite what has been done overseas, such as in Madrid Spain, New Yorkser remain weirdly oblivious, like that movie the Day After Tommorrow with that island flooded and frozen -- likely ruining food that would be mainly stored in lower levels, and no food shipments form outside -- yet no one seems to concerned about starvation, despite hundred of people in the NY public library.

No, the political elites, which IIRC reportedly have the greatest concentration of wealthy political contributors living in the lower 2/3rds of the neighborhoods facing Manhattan's central Park, appear to care as little as possible about improving the road network.

So much for the idea of rigid racial-ethnic stereotypes and the Jesuitical guilt/belief-reflex of the 'progressive' liberal-left belief that spreading the English language was a waste, along with building bridges, freeways, railways and tunnels which serve the masses.

Even when a road is a rail-road, and they feign interest in at least expanding rail.