favored equal rights for the 'other' Zionists- the Arabian peoples who choose to live in peace with the more 'Jewish' settlers of Judea and Samaria - consistent with Christ's maxim of do unto others as you would have them do unto you. 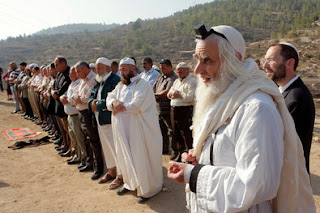 Menachem Froman, a maverick Orthodox rabbi who helped lead settlers into the territory seized by Israel in its 1967 war with Arab nations, then became a fervent, startlingly unconventional voice for conciliation with the Palestinians, died on Monday in Tekoa in the Israeli-administrated West Bank. He was 68.

His son Shivi confirmed the death, Israeli newspapers said. Rabbi Froman had colorectal cancer.
Rabbi Froman was a founder of Gush Emunim, the ideological, messianic settlement movement that sprang up after Israel’s conquest of the West Bank. He became chief rabbi of the settlement of Tekoa, the ancestral home of the prophet Amos, and with his flowing white beard and ringing demands for morality and justice, he himself resembled an Old Testament seer.

His grand, unrealized vision was that the enmity between the settlers and their Palestinian neighbors could be erased by appeals to religious ideals. He carried his message to hosts of Muslim sheiks and met for hours in repeated visits with the Palestinian leader Yasir Arafat and the Hamas chieftains Ahmed Yassin and Mahmoud al-Zahar. He also huddled with Israeli leaders, including Prime Minister Benjamin Netanyahu, during Israel’s battle with Hamas last November.

It did not faze Rabbi Froman that few of the 3,000 residents of Tekoa agreed with his approach, nor that he was once threatened with expulsion from the town. One of his sons, at age 9, protested against his overtures to Arabs.

Rabbi Froman nonetheless spoke out against attacks by Jewish settlers on mosques, and he often visited damaged holy sites with Palestinian officials. He started peace organizations and frequently appeared on Palestinian news media.

He stood solidly with the most right-wing settlers in his refusal to leave the land he said he had come to love, calling it sacred to him and his people. Unlike most other settlers, though, he insisted that he would be comfortable continuing to live in Tekoa even if it became part of a Palestinian state through a peace agreement. At present, Israel claims the right to administer the West Bank, a position widely rejected.

Rabbi Froman said he wanted to turn the discussion away from land and politics to God; the commonalities between monotheistic Judaism and Islam were great, and the two traditions had coexisted for long periods of history, he pointed out. Contested land, he said, could become consecrated land.

“Let’s give God the honor to do what he wants,” Rabbi Froman said in a 1996 interview with The Miami Herald. “In the meantime, the reality is to live in peace with each other.”

His first step in approaching Arab leaders, he said, was “a long conversation,” beginning with two hours devoted to praising God. The essential refrain was: “God is great. God is merciful. God gives great prizes to the man working for peace.” Three more hours were spent comparing religions: “In the Koran it is written. In the Bible it is written.”

“In the end,” he said, “we take five minutes to solve the political problems.”
In February 2008, Rabbi Froman worked with Khaled Amayreh, a Palestinian journalist close to Hamas, to forge a peace agreement that would have released an imprisoned Israeli soldier, lifted economic sanctions on the Gaza Strip, which is controlled by Hamas, and imposed a cease-fire there. Hamas leaders accepted the deal, but Israel ignored it.

Frustrated by the failure of the deal, Rabbi Froman told The Jerusalem Post that the “root of the problem is Israeli and American arrogance.”

“If Israeli governments had grasped these opportunities” over the years, he said, “not only would a great deal of bloodshed have been spared, and there would be a cease-fire between our two peoples, but there would have been no attack on the World Trade Center, and no American invasion of Iraq.”

Some dismissed Rabbi Froman as a mystic given to idealistic but unachievable policy proposals. One was to jump-start the peace process by making Jerusalem an international city, so as to safeguard the religious treasures of Islam, Judaism and Christianity. Israel’s capital would move to another city under the plan. In an interview with The New York Times in 2008, Gershon Baskin of the Israel/Palestine Center for Research and Information called the rabbi a “very esoteric kind of guy.”

But people on both sides of Israel’s political spectrum praised his accomplishments after his death. Peace Now, the liberal advocacy group, said in a statement that Rabbi Froman had “proved that religion can be a bridge to peace.” Davidi Perl, council head of Gush Etzion, the settlers’ group, called Rabbi Froman “a huge scholar, with a great soul, who loved people and brought them closer to the Torah.”


In an interview with the Israeli newspaper Haaretz last year, Rabbi Froman made an unusual comment for a clergyman. He said he had spent his whole life trying to decide if God existed and had never found an answer. He could not escape dwelling on the fact, he explained, that most of his family had been killed in Poland by the Nazis.

Menachem Froman was born in Galilee in 1945 when Britain governed the territory. He was one of the original settlers of Tekoa, a mixed community of religious and nonreligious Jews centered on a school run by his wife, Hadassah, who survives him, as do his 10 children. He went to high school in Haifa, served in the paratroopers during the 1967 war and gradually became more religious.

As he rejected national patriotism in favor of his vision of peace through religion, he became more liberal in other respects. He broke tradition by inviting a female flutist to play in his synagogue. He called for an end to the Orthodox Jewish belief that men should not hear women sing. He protested gender segregation in Israel. He hosted gatherings at which rock musicians played. And he shared his deepest thoughts, like his fear of death.

Rabbi Menachem Froman, an Israeli settler known for his efforts to promote coexistence between Arabs and Jews, has died. He was 68.

His son Shivi Froman said he died Monday after a long illness.

Froman, who served as the rabbi of the West Bank settlement of Tekoa, had ties to many Palestinian leaders. He was an outspoken opponent of attacks by Jewish settlers on mosques. He often visited damaged holy sites with local Palestinian officials. He believed Israelis and Palestinians could live together peacefully.

Froman was a founder of the Gush Emunim movement promoting Israeli settlement of the West Bank. He opposed the removal of Jewish settlers from the area, claiming a sacred biblical connection to the land.

His funeral is scheduled for Tuesday.