Note: I am thinking to the recent negative talking about Germany by Craig Oxley of The Unhived Mind forum, on which he continually brainwashed about the DVD Germany intelligence as "over the CIA and NSA". I firmly believe The Unhived Mind & Craig Oxley deeply involved in this Roman Catholic operation in to present Germany as "bad guy", a psycho-ideological brainwash aimed to the next definitive Catholicization of Germany:

The apparent withdrawal by the austerity-conscious German Chancellor allowing the Italian and Spanish direct access to Eurozone funds without incurring government debt has been met with delight in Italy.

One newspaper the Libero showed Mario Balotelli kicking a football with Angela Merkel’s face on it symbolising Italy’s victory over Germany in not only the EU but also Euro 2012.

The Libero ran the image alongside the headline “VaffanMerkel” which translates to “F*** Off Merkel.” 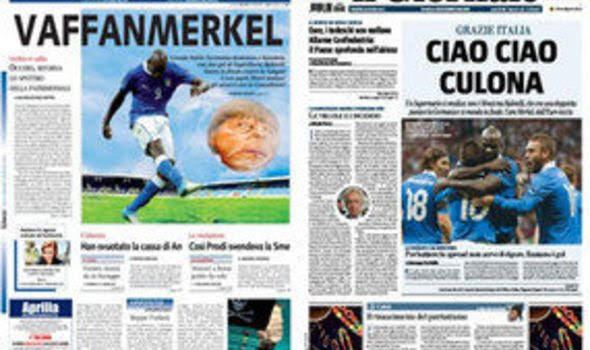 [NOTE - it is Craig Oxley that smears Angela Merkel as 'Nazi' and not Avles nor myself.]

And brought to my attention by this informative article

Since Putin's tirade against the USA 3 days ago, the Eurasianist lackeys have been working extra time to polish his image. Paul Craig Roberts, an american economist, a Georgetown teaching professor with fatalistic views on the West, and an increasingly vocal supporter of Putin and his feudal caste, is here going about the tasks set by his masters, the jesuits.

Vladimir Putin’s remarks at the 11th meeting of the Valdai International Discussion Club are worth more than a link in my latest column. These are the remarks of a humanitarian political leader, the like of which the world has not seen in my lifetime. Compare Putin to the corrupt war criminal in the White House or to his puppets in office in Germany, UK, France, Japan, Canada, Australia, and you will see the difference between a criminal clique and a leader striving for a humane and livable world in which the interests of all peoples are respected.....

In a sane Western society, Putin’s statements would have been reproduced in full and discussions organized with remarks from experts such as [added link] Stephen F. Cohen. Choruses of approval would have been heard on television and read in the print media. But, of course, nothing like this is possible in a country whose rulers claim that it is the “exceptional” and “indispensable” country with an extra-legal right to hegemony over the world. As far as Washington and its prostitute media, named “presstitutes” by the trends specialist Gerald Celente, are concerned, no country counts except Washington. “You are with us or against us,” which means “you are our vassals or our enemies.” This means that Washington has declared Russia, China, India, Brazil and other parts of South America, Iran, and South Africa to be enemies.

This is a big chunk of the world for a bankrupt country, hated by its vassal populations and many of its own subjects, that has not won a war since it defeated tiny Japan in 1945 by using nuclear weapons, the only use of such terrible weapons in world history.

As an American, try to image any known American politician, or for that matter any professor at Harvard, Princeton, Yale, or Stanford capable of giving an address to an educated discussion group of the quality of Putin’s remarks. Try to find any American politician capable of responding precisely and directly to questions instead of employing evasion.

No one can read Putin’s remarks without concluding that Putin is the leader of the world.

it has never been so clear, thank you very much for deciphering the precision of this hegelian 'moment'of the thought:
the kabalistic left pillar of rigor is lutheran fashist nazi germany while the right pillar of mercy is displayed by vatican putin orthodoxy both paving the way of the babylonian zionist khazar euro asiatic empire.Satan and lucifer birthing nwo naby horus.What a piece of sh..
Quotation marks every where of course, nothing having sense anymore,but thank you again, sir,this post is historical

Not Zionist but Jesuit.

The Unhived Mind is a joke- it is clearly controlled opposition.

Everybody loves Putin. Even the truthseekers. That should tell us something. That Russia, not the USA , is the NWO head state. More precisely the Roman Catholic super-empire, as Douglas and a few other keen observers have been articulating these last few years.

The so-called truthseekers etc are seriously discrediting themselves.

They are not anti corruption of the west, they are anti west- and I don't mean the western roman empire. They are idiots, like that fool Lyndon LaRouche who hates the British yet gives the Spanish a free pass.

Exactly, the finger is sick, so lets cut off the arm mentality is used to push people into the eastern catholic fold. No doubt many "conservatives" in the USA will gladly convert to Orthodoxy/Catholicism en masse when given the chance. Just because they don't support homosexualism, abortions and radical islam(not saying those are right). The truthseekers have a different reason to love Russia - they believe them to be "duh faighters ughgenst the Nu Word Ordughr end duh zianists"

But there is a suprise awating those new converts. Orthodoxy is not particularly fond of the bible and freedom of religion, neither of political/medicinal liberty in any form and in any degree. In fact, the Orthodox church cannot exist without strong governmental support and protection. It accepts the dictates of the state and employs its structures and methods to enforce dogma on the public.

So yeah, we are watching a pandemic of mass delusion and this is just the beginning.