27th Jesuit Superior General Pedro Arrupe
and 3rd Polish Pope of the 20th Century:
Karol Wojtyla Back and to the Right 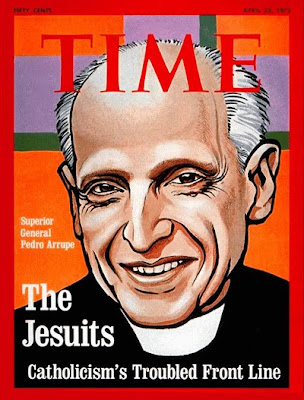 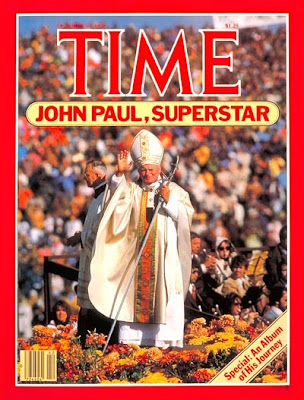 Karol Jozef Wojtyla; born May 8, 1920
'Pope John Paul 2': October 16, 1978 - April 2, 2005
The Jesuit Order’s post WW2 spin – of not being ‘right’ wing against ‘godless communism’ but rather ‘left’ wing for ‘social justice’ --.through Janssens’ 18 year Generalate, continued after his brain hemorrhage induced October 5, 1964 death via the also 18 year Generalate of his successor Pedro Arrupe, born November 7, 1907, from 1965 until his debilitating August 7, 1981 stroke less then 3 months after the unsuccessful assassination attempt on John Paul 2, who had become Pope after the mere 33 day Papacy of his predecessor John Paul 1:

- was a missionary in during WW2 (connection with Kolbe?);

- was appointed Jesuit Superior and Master of Novices in , 1942

- was living in when the atomic bomb was exploded in August 1945.

Arrupe’s Generalate occurs with the rise of the organized ‘left’ anti-war movement about the war in during the later 1960s and well into the 1970s when it was becoming more and more popular to consider oneself “left”, with Arupe himself was involved with Jesuit activities in ostensibly on behalf of the poor.

John Paul 2’s papacy, extending some 26 1/2 years from October 16, 1978 to his April 2, 2005 death, starts at about the same time when economic and later terrorist troubles went against incumbent figures as ‘left’ U.S. President Jimmy Carter as being weak, leading to the rise of ‘right’ Ronald Reagan in the U.S. and Margaret Thatcher in the U.K, along with the rise of activities opposing the Soviet propped communist regime in Poland.

On May 13, 1981, less then 3 months before Arrupe’s devastating stroke, Wojtyla would survive an assassination attempt, which according to reformation.org was ordered by Arrupe. 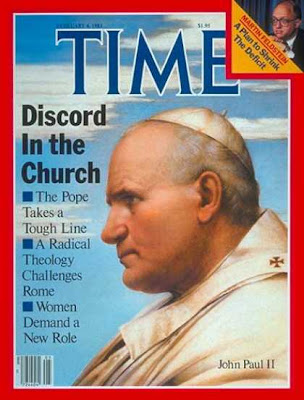 Wojtyla – JPII went on to see the fall of the controlled communist regimes and the publication of this sort of cover on Time Magazine, continue as Pope until 2005: 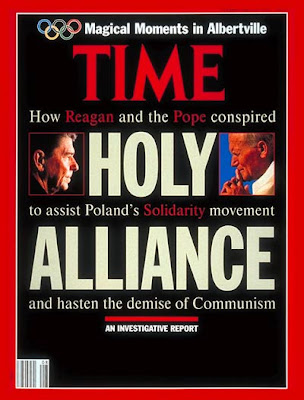 Woytyla was the 3rd 20th Century Polish Pope. The others were:

Wlodimir Ledochowski, who was apparently ½ Polish via his father Anton Ledochowski (1835-1885) , and ½ Swiss-Austrian (apparently ethnic German) via his mother Josephine Zizers who was born in eastern Switzerland.

Pius X, who was ¼ Polish, who would die just hours after the death of the Jesuit Order Super General Franz Wernz, a German, on August 19-20, 1914
Posted by Douglas Andrew Willinger at 2:00 AM