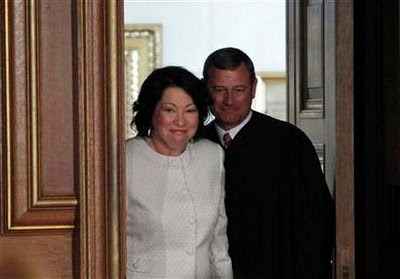 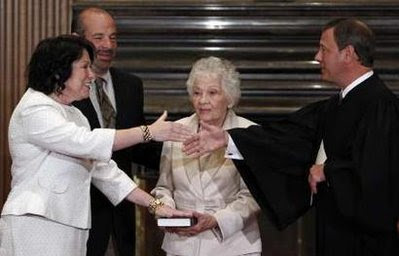 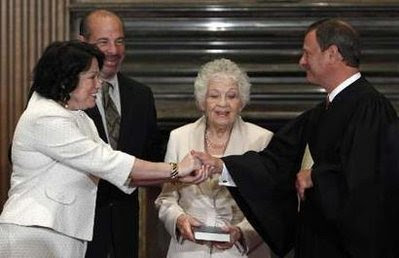 I mentioned the other day that the emerging image of Obama Supreme Court nominee Sonia Sotomayor is not one of an “empathetic” or “activist” judge, but one of a left-leaning authoritarian, sort of a mirror image of Samuel Alito. She’ll be a reliable vote to uphold government power, be it for cops, prosecutors, regulatory agencies, or the executive.

It’s looking more and that way. From today’s L.A. Times

Though her critics portray the Supreme Court nominee as a liberal activist, her colleagues and legal opponents in the early 1980s draw a picture of her as a zealous prosecutor whose experiences combating crime have made her, according to experts who have studied her legal decisions, something of a law-and-order judge, especially when it comes to police searches and the use of evidence…

Gerald Lefcourt, a high- profile criminal defense lawyer in New York, appeared before Sotomayor while she was a federal district court judge. “She always seemed to be leaning toward the government — not outrageously so, but if you look at a lot of her criminal law cases you can see she’s pretty conservative,” he said.

Lefcourt wasn’t surprised. He had faced off against Sotomayor when she was an assistant district attorney.

Sotomayor was “very police-like,” he said. “Dismissive of what the defendant had to say about anything.”

That’s a quote from Jeffrey Deskovic, who served 16 years for a rape and murder he didn’t commit. He was finally exonerated by DNA testing.

When Deskovic appealed to the U.S. Court of Appeals for the 2nd Circuit, Judge Sonia Sotomayor co-wrote a two-page opinion that refused to even consider the evidence of Deskovic’s innocence because his lawyer was four days late filing the petition [upon the incorrect information from a court clerk]. So Deskovic spent an extra six years in prison awaiting a DNA test.

Sotomayor Has Your Back- Biden
http://www.theagitator.com/2009/06/10/biden-to-law-enforcement-groups-sotomayor-has-your-back/

Biden made the remark at an assembly of eight law enforcement groups after he detailed Sotomayor’s tough-on-crime record in the courtroom.

“There’s a part of her record that seems to be, up to now, been flying under the radar a bit. And that’s her tough stance on criminals and her unyielding commitment to finding justice for the victims of crime,” Biden said.

He then repeatedly said, “She gets it,” and sought to assure the law enforcement groups that she would be on their side.

“So you all are on the front lines. But as you do your job, know that Judge Sotomayor has your back as well,” Biden said.

Jocks v. Tavernier starts with the breakdown of a tractor-trailer on the Long Island Expressway in 1994. Thomas Jocks, a truck driver, tried to pull his truck off the highway when his engine failed. He made it onto the shoulder, but about 4 feet of the trailer were jutting out into the right-hand lane. Jocks put up flares behind the truck, as state law requires. But he was worried about causing an accident. Unable to flag down another car, he ran three-quarters of a mile to a gas station, which had an outdoor pay phone (1990s = the pre-cell-phone dark age). Augusto Tavernier was talking on the phone, actually from inside his car, because the phone had a cord designed to be used that way.

Jocks gave the following account of what happened next: He ran up and told Tavernier there was an emergency because his truck was jutting out onto the expressway. Tavernier told him to find another phone. Jocks repeated the emergency part of his story. Tavernier swore at him. Jocks knocked on his windshield and kept urging him to give him the phone. Finally, Jocks went into the phone stand and hung up on Tavernier's call. At that point, Jocks said, Tavernier threw the receiver at him, tried to get out of his car, couldn't because the phone stand was blocking his door, and drove forward. Jocks dialed 911. Tavernier charged him, yelling. Jocks yelled back. Tavernier said, "Why don't I blow your fucking brains out?" and drew his gun. He pressed the gun into the back of Jocks' head, and said, "Freeze, police"; and then an off-duty Nassau County police officer arrived, got the situation under control, and arrested Jocks.

Tavernier, too, proved to be an off-duty cop. After his arrest, Jocks was held for 24 hours and ended up having to make 28 court appearances before he was found not guilty of felony assault. He spent $20,000 on legal fees, lost his truck driving job, and had to give up full custody of his daughter, who went to live with her mother, his ex-wife. That dire, black moment on the LIE truly cost him...