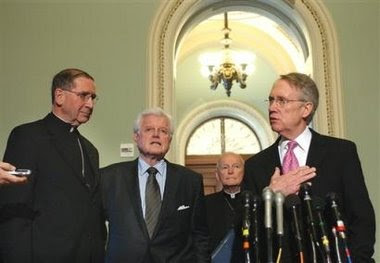 lobbying for the civil rights of illegal immigrants)

There is much truth to the adage that many of our wounds are self inflicted. This has been especially true for the Catholic Church in the United States and the Archdiocese of Boston in particular. Recall that the clergy sex abuse scandal first came to light there because of their egregious nature and the laxity of the then Archbishop Bernard Cardinal Law in handling them. According to statistics the Church is still reeling from the aftershocks.

On Wednesday the Church further diminished her credibility when it was announced that a Mass of Christian Burial would be celebrated for Senator Edward M. Kennedy at Our Lady of Perpetual Help Basilica. It was also announced that President Barack Obama would be the eulogist.

Senator Kennedy, along with President Obama have been the most pro-abortion and pro-embryonic stem cell research politicians in the nation. As a matter of fact, Senator Kennedy refused to vote for Supreme Court nominees Robert Bork and Samuel Alito for fear their appointment might lead to overturning Roe v. Wade. These positions are inimical to Catholic Church teaching and throughout the years, the American hierarchy has railed against Catholic politicians such as Kennedy who hold such views. Some bishops have even advised them not to receive Holy Communion -- an action just short of excommunication.

In recent days the spin-doctors have done their best to portray Senator Kennedy as a devout Catholic. Stories of his visits to church in order to pray for his ailing daughter Kara, a cancer survivor, and reports of his personal religiosity have been widely circulated. The media has also noted numerous visits by priests to the Kennedys’ home during his illness for the administration of the sacraments, presumably including confession and even the celebration of a private Mass in Kennedys’ living room. There is no report, however, of repudiation of his voting record or sorrow for his obstinate refusal to adhere to Catholic morality on two of the most important life issues. An important part of the Sacrament of Penance, along with sorrow for sin, is to try to repair the damages that our sins have caused. Certainly, enough time had elapsed between the diagnosis of the Senator’s terminal illness and his death for him to make amends and to alleviate some of the scandal. Yet, there is no indication that this has happened.

A Mass of Christian Burial is a privilege -- not a right. It is for those who have lived a Christian life. Senator Kennedy’s scandalous disregard of his Church’s teaching and the destruction of human life that may be attributed to his voting record make his funeral celebration quite dubious. The Catechism of the Catholic Church states: “Scandal is an attitude or behavior which leads another to evil… and that it takes on a particular gravity by reason of the authority of those who cause it”(n. 2284-85). For such a person the Code of Canon Law says, “Church funeral rites are to be denied to the following (unless they gave some sign of repentance before death): manifest sinners to whom a Church funeral could not be granted without public scandal to the faithful” (c. 1184.3). How many Catholics have been led astray by Senator Kennedy and other prominent pro-choice Catholics? And, finally, how many other Catholic politicians will be emboldened to emulate his behavior because the honor the Church is extending to him?

Some will argue that the Church, by its very nature, always gives the benefit of the doubt to the sinner. Yet, even such an act of charity calls for a pastoral solution so as not to mislead others and cause greater harm. In this case, a subdued funeral service should be offered for the repose of Senator Kennedy’s soul. It should be made clear that, as it is the purpose of every Catholic funeral, the Mass is being celebrated to beg God’s mercy for the deceased. But, then even this solution would be meaningless when the nation’s most pro-choice president ever is permitted to eulogize his ideological soul mate in the Church’s sanctuary. Imagine the accolades that will be lavished on the Senator Kennedy’s character and career!

The Church’s credibility has once again been undermined by the hierarchy of the Church in Boston. This scandal is even bigger than the one enabled by Cardinal Law because of its bad message and long ranging implications.

Rev. Orsi is a Research Fellow in Law and Religion at Ave Maria School of Law.