From The Wall Street Journal:

SANTA CRUZ, BOLIVIA -- A television ad that has aired around the country opens with a photo of Bolivia's leftist President Evo Morales dressed in the garb of a traditional shaman. An image of Jesus Christ arrives to knock Mr. Morales off the screen, and a document labeled "New Constitution" appears amid flames. "Choose God. Vote No," the ad advises.

The ad, funded by an evangelical church based in this stronghold of the political opposition, points up how religion is playing a growing role in the latest chapter of Bolivia's sometimes bloody fight over a new constitution, which is up for a national referendum on Sunday.

Watch a Bolivian Christian group's ad that asks voters to "choose God" in voting against a new constitution.

The religious fight marks a deepening of the country's political split under Mr. Morales, an Aymara Indian who leads the ruling party, the Movement to Socialism. The conflict has pitted poor, heavily indigenous western areas where Mr. Morales is revered against whites and mixed-race mestizos in the natural gas-rich tropical lowlands. More than a dozen people have died in clashes related to the constitutional text.

If approved, Bolvia's constitution would allow Mr. Morales, elected in 2005, to seek a second consecutive five-year term, reshape congress, and extend the state's power -- marking a victory for the strongly anti-American leader who recently expelled the U.S. ambassador, nationalized the country's energy supplies, and whose key patron is Venezuelan president Hugo Chávez.

In both Venezuela and neighboring Ecuador, leftist leaders have used referendums as ways to consolidate power and mold their countries along populist lines. Incoming secretary of state Hillary Clinton promised "tough and direct" diplomacy in the region "in response to the fear-mongering propagated by Hugo Chávez and Evo Morales."

Others have compared Mr. Morales to South Africa's Nelson Mandela for bringing a Bolivia's long-suffering indigenous majority into power.

At the heart of the latest controversy is the new constitution's stated goal of "refounding" Bolivia as a socially-just state guided by indigenous beliefs -- including elevating the Andean earth deity Pachamama to the same stature as Christianity's God. It would recognize broad new rights for Bolivia's Indians, termed "original indigenous peasant peoples" in the document, and demand "decolonization" of all aspects of society. Bolivia's current constitution allows for freedom of religion but specifies Roman Catholicism as the sole state religion. 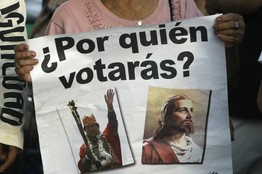 At a rally against Bolivia's proposed new constitution in Santa Cruz on Thursday, a woman carries a sign that pits President Evo Morales against Jesus Christ, asking, 'Who Will You Vote For?'

For Christians, whose faith arrived in Bolivia along with Spanish Conquistadors almost 500 years ago, the fight is over fundamental values, which they say the new constitution tramples on, and replaces with ultra-liberal, atheist concepts or worse, those of indigenous religions. They say the constitution appears to open the door to abortion and gay marriage, although it doesn't speak directly to either issue.

The Catholic Church hoped the constitution would define life as beginning at conception, and marriage as being between a man and a woman. The text doesn't offer a clear definition on either point, instead offering broad pronouncements such as one that "guarantees the exercise of sexual and reproductive rights," language that has religious groups worried.

"One of the problems with the constitution is that it's full of ambiguity," says Robert Flock, vicar general of the Santa Cruz archdiocese. That means who is in power is likely to matter more than what the text actually says, church leaders fear.

For leaders of the political opposition, Christianity is a powerful uniting thread. This year, several lowland states voted for autonomy, a development that shook Mr. Morales's government.

"Paganism versus Christianity is the situation we are in," says Rev. Rolando Hurtado, president of the Santa Cruz-based church, Iglesia Cristiana de la Familia, that funded the recent ads.

The Catholic Church disavowed the evangelical ads, but followed with its own detailed critique of the constitution, handed out as bullet points after mass in cities around Bolivia this week. While praising Mr. Morales's focus on the poor, it raised concerns about his effort to concentrate power.

Mr. Morales's party asserts the opposition's true aim is to protect their economic interests. Gabriela Montaño Viaña, the presidential representative in Santa Cruz, calls the religious campaign a new opposition strategy, adding, "It was so disrespectful that it lost credibility."

The constitution "could open the door to a civil law allowing homosexual marriage if there was a public will to do that," she said.

In a country that is officially 97.5% Christian, the stance of church leaders carries significant weight. So much so that on Sunday Mr. Morales -- who has actively promoted indigenous beliefs, including appointing traditional medicine men to his government -- publicly declared himself a Catholic, though saying he believes "quite a bit" in Pachamama.

At the same time, the president has sought political traction by deepening the conflict with the church. During the last few days, Mr. Morales has called on the Vatican to halt the "attacks" and at a rally on Thursday accused church leaders of lying to the Bolivian people.

"They are tremendously nervous about the results," said Rubén Costas, prefect of the department of Santa Cruz, a farming region that is the seat of the opposition and where a large statue of Christ is the usual gathering point for antigovernment rallies. "This is an extremely Christian country, and they can't ignore that."

Public opinion pollster Grupo Mori said support for the constitution had weakened considerably in recent weeks, although the role of the religious campaign was unclear. However, the "yes" vote is still ahead in Bolivia's 10 largest cities by 40% to 37%, and undecided and rural voters are expected to swing polling solidly in favor.

Write to Antonio Regalado at antonio.regalado@wsj.com

Posted by Douglas Andrew Willinger at 12:11 AM